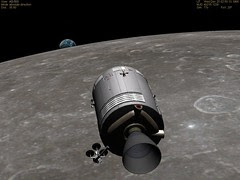 While I'm not as systematic about it as DarthVader in his "Fly Me to the Moon" blog, I too am exploring the wonderful Apollo add-on for Orbiter (NASSP 6.4.2). Although it still takes me minutes to find the right switches on the CM or LM panels, thanks to "Saturn V" (Don Hagerty), I can still experience the key moments of historic Apollo missions. He has posted scenarios for Apollo 7, 8, 9, and 10 at Orbit Hangar. Each zip file contains historically accurate scenarios for many points in the respective missions.

For example, the crew of the Apollo 10 Lunar Module experienced a "staging anomaly" (caused by some incorrect switch settings) which caused the LM to tumble when they were about to separate the ascent stage from the descent stage in low lunar orbit. Commander Tom Stafford was able to recover from this, and now so was I! I also docked the CSM with the LM. The picture above shows the Apollo 8 CSM in lunar orbit on Christmas Eve 1968, right at the time the crew made their famous readings from Genesis (the sound for that is not included in the scenario, though it probably could be!). Thanks to the NASSP team and to Don for making it possible (and even fairly easy) to recreate parts of these historic missions. More pictures at Flickr.
Posted by FlyingSinger at 12:41 PM

Nice shots Bruce! :) I noticed that the comments on some of your pictures on flickr are incorrect. It should be Apollo 10 instead of 8 for all the shots with the CM and LM.

I corrected the labels - thanks!