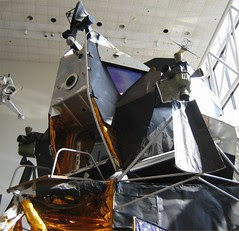 Day 2 of the Mars Society Conference in Washington was also quite good, but I only caught one plenary speaker (Dr. Scott Horowitz, former astronaut and now NASA Associate Administrator for Exploration) before taking the rest of the morning off to go visit the National Air & Space Museum, just four blocks away. I've been to NASM maybe six times over the years but I still love it. The most obvious new thing in the main gallery was SpaceShip One. I didn't have much time, so I focused on the space side of things, Apollo, X-15, Skylab, etc. I also visited a gallery devoted to the Wright Brothers which was new to me -- it must have been added for the hundredth anniversary of flight in 2003. More pix on Flickr.

I devoted 45 minutes to seeing Tom Hanks' IMAX 3D film about the Apollo Moon missions, "Magnificent Desolation," which I had been meaning to see for a long time. It was fantastic - with the huge screen and 3D, I felt as if I were really viewing the dramatic terrain at Apollo 15's Hadley Rille. The script was also funny and extremely moving. Tom Hanks is a space freak for sure, and this movie is a loving tribute to the finest days of human spaceflight (so far) and to the people who made it happen.

Keeping with the apparent theme of this side trip from the Mars conference, I saw a book I had been curious about, Return to the Moon by Apollo 17 astronaut/geologist Harrison Schmitt. Since it looked pretty good and was autographed by the author, I decided to buy it.

This afternoon I sat in on five or six presentations at the Mars conference, a couple of them quite good, several others rather poorly prepared and presented. Grant Bonin did a very nice job on his updated overview of the Mars for Less mission design. Chris Carberry (political coordinator for the Mars Society) presented "Operation President," an enthusiastic talk about how we can build on past successes in reaching presidential and congressional candidates to be sure that the" Vision for Space Exploration" and Mars in particular will be on the agenda for both Democratic and Republican candidates in the 2008 presidential race.
Posted by FlyingSinger at 5:35 PM