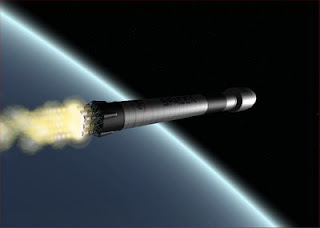 NASA announced today that the SpaceX Falcon 9 launch vehicle and Dragon spacecraft have officially been selected for ISS Cargo Resupply Services. This system will replace the shuttle for US cargo deliveries to the ISS after 2010. More details here. SpaceX also announced that the first Falcon 9 test vehicle will be fully integrated at Cape Canaveral by December 31. I don't know when the first F9 test launch will take place in 2009, but this certainly is progress.

The picture shows a Falcon 9 model in Orbiter, a few minutes after launch from the Cape. Notice the nine first stage engines burning. The payload isn't a Dragon but a satellite in a large faring as shown on the SpaceX Falcon 9 main page. I haven't checked for a while on SpaceX add-on developments for Orbiter. There were several things in work earlier this year but I don't think anything was completed. I have some Falcon and Dragon screen shots from Orbiter on Flickr.
Posted by FlyingSinger at 11:17 PM