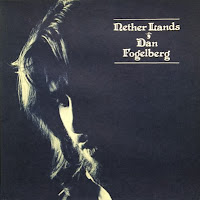 I found a forgotten box of vinyl record albums in the basement the other day. One of the albums was Nether Lands, a 1977 record by the late Dan Fogelberg. While I like some of Dan's music, I was never really a major fan - except for this album! When I read some of the lyrics, I suddenly realized what a favorite this record was back in the day. How could I have forgotten it? I thought about transferring the vinyl record to MP3, which I have done with some old records with disappointing results. I looked on Amazon and found the CD was available for $4.99, and today it arrived (I'm such an Amazon junkie that I have a "Prime" account which gives me free two day shipping on almost everything).

What a great record! There are no big hit singles - it's one of those albums that works best as an complete work. Good lyrics, beautifully recorded acoustic instruments, cool harmonies, lush but not overbearing orchestration. Nice.
Posted by FlyingSinger at 10:22 PM

You should try listening to Dan's music now--I loved it way back when, but love and appreciate his talent for word and music so much more now. I still listen and marvel at his fantastic talents as a songwriter, musican and vocalist!! Give it a try, you wont be sorry!!! My fav--The Innocent Age-every song is fantastic!!!