How Big Is Our Galaxy? 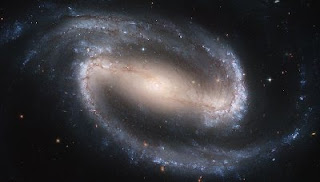 Not much time for blogging this weekend. A nasty New England ice storm knocked out our power yesterday (along with hundreds of thousands of other Massachusetts and New Hampshire homes). We were lucky enough to get power back after only 15 hours or so, while news reports indicate that it may take three days or more for many in the region. We have a lot of downed tree branches but no damage to the house. Internet access was messed up too. But it could have been much worse. I'll be busy the rest of the weekend, a Neil Young concert tonight, a family event tomorrow.

So I'll leave you with an interesting fact from a recent NASA document for kids, "Extreme Space Facts." I've heard a lot of "how big" analogies for sizes and distances of astronomical objects, but this one was new for me:

How big is our galaxy? If the Solar System, from the Sun all the way out to Pluto, were shrunk to the size of a U.S. quarter [a coin about 24 mm in diameter], the Milky Way would be the size of North America.

The picture is a Hubble image of the barred spiral galaxy NGC 1300. Evidence from radio and infrared astronomy suggests that our Milky Way Galaxy is also a barred spiral.
Posted by FlyingSinger at 3:09 PM