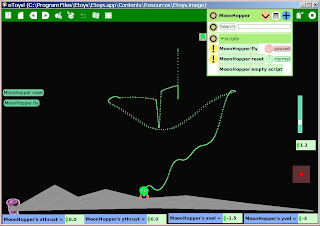 So here is my 366th blog post on the 366th day of the year. Funny how that worked out. I'm having a scattered but mostly enjoyable winter break though it is going faster than I'd like. Aside from some brief travel to visit my Mom in New York, we've just been hanging around the house. One thing I've been working on is learning Etoys programming for a possible space-themed middle school science teaching unit. So far I've written a simple prototype "Moonhopper" project for exploration of 2D motion with gravity, hover engines, thrusters, etc.

On a completely different tack, I've resurrected the ailing desktop PC I used to use for recording projects. This 2002-era Dell had become incredibly slow and unstable. I reinstalled Windows XP, upgraded to 1 GB of RAM, and reinstalled my music applications including Band in a Box 2007 and SONAR 3 (several versions old now but still OK for me). The computer is reasonably zippy now. I even started to write a new song, the first in over a year. I'm also reconnecting and testing my MIDI and audio gear so I'll be ready to record.

I've also got another book underway, Isaac Newton by James Gleick. He really brings the strange and brilliant Sir Isaac to life.

Finally, thanks to Hobby Space (RLV/Space Transport News), I learned about a great list of the top 100 space and astronomy blogs at Find-Schools-Online.com and was flattered to find Music of the Spheres on the list at #27 (not a ranking, it's arranged by category). Cool!

A safe and happy new year to all!
Posted by FlyingSinger at 10:21 AM