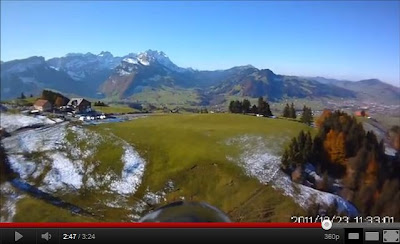 I just learned that a fellow optical professional in Europe has a cool hobby - shooting HD video from a RC model airplane flying above the beautiful scenery of Switzerland. Although I have known him for some years through my visits to his company, I never knew about the RC flying. Since I'm interested in pretty much anything involving flying, I thought this was just great and wanted to share it.

The above image is a screen shot from this video. The prop is stopped and folded through most of this video (it's essentially an RC motor glider), but the engine is briefly started during the turn to final approach and landing at about 3:10. This video is also great (you can see the prop stop and fold at about 0:18). Some others are here.
Posted by FlyingSinger at 9:07 AM No comments:

Back in the Shuttle Again 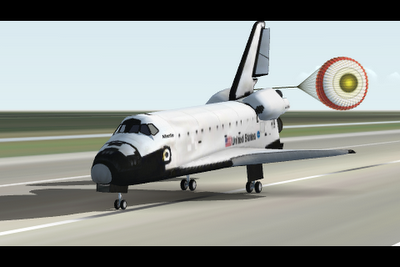 Version 2.2 of the amazing iOS app f-sim space shuttle is available at the iTunes store. There is now a beautiful animation of the drag chute's deployment and release after you touch down (visible in the external views, normally seen in replays after you land, though I suppose you could land in the external view). The replay views are great, especially when you've done a decent landing. There is also an optional "windows in the sky" landing aid that I find more distracting than helpful (but it is probably helpful when you are first learning to land with the HUD visual cues). Excellent app. There is also an official video available here. 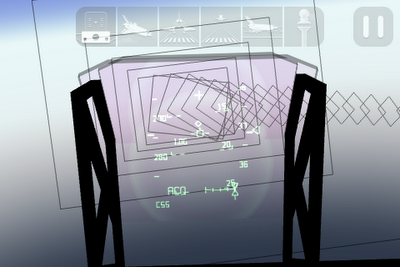 Update: The "visual approach path" (windows in the sky) is more useful than I thought. Up to now I've mostly done final approaches rather than the full "HAC" approaches which I was never very good at. But with the visual approach aid, full HAC approaches make much more sense, and I was successful on my first two tries. Now I can see what the HUD cues were trying to tell me. This app has amazing replay value (assuming you are a space and flight sim nerd like me).
Posted by FlyingSinger at 11:40 PM No comments: 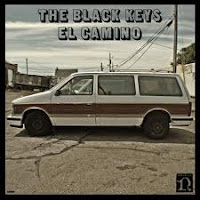 Why didn't I get the memo? The Black Keys have been around since 2001, and I never noticed them until last week when I happened to buy the current issue of American Songwriter Magazine with them on the cover. Two guys from Akron who make a whole lot of great music with basically drums, guitar, and vocals. I previewed and bought the two most recent albums, Brothers (2010) and El Camino (released this month). Damn, these guys are good. They definitely have a strong blues persuasion but they bend the blues every which way in their infectious (in a good way), hard-driving songs. Great writing, great playing. Sometimes they remind me of Cream (a sixties favorite), but their sound is definitely their own. Check out the videos for "Lonely Boy" (imagine the huge investment in making this video!) and the action-packed and hilarious "Howlin' For You" (truly a big budget video). Great stuff! Man, I gotta write me some new blues-rock songs (trying to get in the mood there).
Posted by FlyingSinger at 3:54 PM No comments:

And here I was thinking Burt Rutan had retired.

I just heard about this and watched the simulation video. The concept is to scale Burt's "White Knight" carrier/launch aircraft to super-jumbo size (six 747 engines) to provide a runway-launched "first stage" (Scaled Composites) for a large orbital booster (SpaceX) for cargo or people (using the SpaceX Dragon spacecraft). Stratolaunch is a Paul Allen project with commercial operation projected for 2016. Of course nothing is flying yet, but private space looks to have a few tricks up its sleeve for the coming years.

Posted by FlyingSinger at 3:59 PM No comments:

Exploring Space With Your Computer (Again) In April 2009, I contributed to the International Year of Astronomy daily podcast series with a podcast called "Exploring Space With Your Computer." It featured audio dramatizations of a mission to Europa and the final seconds of the Apollo 11 moon landing, as simulated in the free Orbiter spaceflight simulator. It also discussed the free planetarium program Stellarium and a few other free tools for exploring space from the comfort of your computer keyboard. I used sound effects from Orbiter and also wrote and recorded a spacey-sounding musical soundtrack for the podcast. It was fun to do.

The daily astronomy podcast program has continued beyond 2009, and today "Exploring Space With Your  Computer" is being featured as a "classic" thanks to someone's unexpected cancellation. It's nice to be featured, even as a rerun. I posted a set of Orbiter screenshots illustrating my simulated space adventures on Flickr. You can read more about the podcast (including web links) in this 2009 blog post. The podcast series is continuing into 2012 - maybe I'll even find time to do a new podcast next year.
Posted by FlyingSinger at 11:17 AM No comments:

Basement Tapes (But No Tapes) 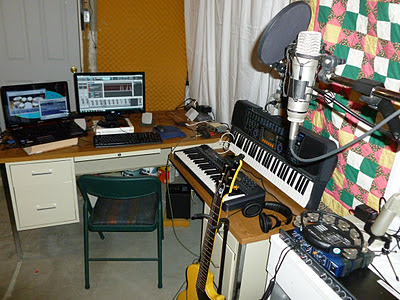 I've been "gearing up" (quite literally) to get back into music recording. I started with powerful new "gaming" laptop and Cakewalk Sonar X1 (recently upgraded to the full Producer Edition with a $99 holiday special). I added a new monitor, a new MIDI keyboard (Oxygen 49), a USB digital audio interface, a new electric guitar (a cheap Epiphone that still plays pretty well), and a mandolin that hasn't arrived yet. With all the soft synths and guitar processing bundled with Sonar, cheap input devices like the Oxygen 49 and the Epiphone "Les Paul Junior" can sound like just about anything (just add inspiration and talent - that's the tough part). I've set all of this up in my own little corner of the basement, as shown above (see if you can spot the paint cans under the desk). I had some of the equipment (microphones, preamps, tambourine, various acoustic guitars, a zillion cables) from my previous recording setup. That was based on a circa-2002 XP desktop and Sonar 3. Major upgrade time.

This is an embarrassment of riches, music production wise. But it won't do me much good if I can't use the software properly, and Sonar X1 Producer has a LOT of bells and whistles to figure out. Fortunately there are some great tutorials on the web. One of the best sources of Sonar guidance is MCI Studio in the UK. MCI is pretty much dedicated to Sonar and offers an impressive range of tutorial videos and other resources. Finally I am learning how to use buses and vocal pitch correction correctly (among other cool stuff, like tips for recording background vocals). MCI stands for "musically creative inspiration." Indeed.

With all of these tools and knowledge, I'm hoping to record more at home on my next recording project, though I'm sure I will still need the impressive talents of my producer Roger Lavallee and the fabulous and nearby Tremolo Lounge for many tracks. I also need some new songs. I'm working on that in my not-so-copious spare time.
Posted by FlyingSinger at 10:03 PM No comments: