Lots to do this weekend, but I've told myself that as a citizen deeply concerned about humanity's future in space, I must make time to read the final report of the Augustine Committee, "Seeking a Human Spaceflight Program Worthy of a Great Nation." I've downloaded the PDF and I have it open on my computer ready to read. But first I must get past Napoleon and the damn dragons. 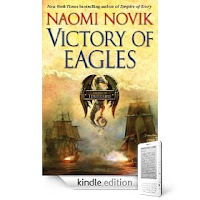 I've been sucked into Naomi Novik's "Temeraire" series. As I've written about before (here and here), this is an "alternate history" series that takes place in the early nineteenth century and revolves around the Napoleonic Wars in Europe. It's reasonably good historical fiction with one major addition: intelligent dragons that interact with humans in various ways. In the first book (His Majesty's Dragon), they were pretty much featured as platforms for aerial warfare, but in the second book (Throne of Jade), Temeraire and Laurence traveled to Imperial China, where dragons are deeply integrated into the culture and respected as independent, intelligent beings (though there is still plenty of fighting). The third book (Black Powder War) brought Temeraire and Laurence to Turkey after a harrowing cross-country journey from China. There were new characters and many adventures, but I found it hard to get through some parts of this book - certain contrivances threatened my willingness to suspend disbelief, and I found the plot "dragon" in some parts (sorry!).  I even resolved to quit the series with this book.

But Novik managed to hook me in the end when Temeraire and Laurence finally arrived home to find that a horrible dragon plague was threatening to leave Britain wide open to Napoleon's invasion plans. This made me curious enough to download and read the next book, Empire of Ivory. This book takes place mostly in South and southern-central Africa, where there is reason to believe a cure for the dragon disease can be found, and of course more disasters and adventures ensue, and we meet a civilization with a human/dragon culture quite different from either the Chinese or European models. For me, Empire of Ivory was much better than Black Powder War (though if you should decide to read these books, I strongly suggest you read them in order and not skip any - characters and plot elements from the earlier books are important in the later books, and there isn't too much back story explanation in the later books).

This brought me to the last published book in the series (Victory of Eagles) which finds Temeraire and Laurence imprisoned as traitors (long story!) and temporarily out of the action as Napoleon's invasion of Britain looms. It's quite a page-turner (or screen-flicker since I'm reading all these books in Kindle format on the iPod Touch) and it's keeping me from my music plans, the Augustine report, and some promised housework. Fortunately the sixth book (to be set in Australia) is not due for a while so I'll be able to get some stuff done once I finish this one later today.

I normally don't go in for fantasy (for example, I like the Lord of the Rings and Harry Potter movies, but could never finish any of the books). But Novik's dragon books don't strike me as fantasy - the world she builds is richly detailed and historically and culturally realistic in most respects. The fact that there are talking dragons just happens to be the way things evolved, and it just works for me as long as I don't think too much about the flight physics and implausible payloads of these enormous dragons. Somehow it's all made possible with "air sacs" (hmmm - helium sacs maybe?).
Posted by FlyingSinger at 12:28 PM