I've always loved bookstores, new and used. For me, serendipity is the major draw of the small independent store. Amazon can offer me anything I want if I know I want it. But what about all the promising books that I probably would want if I only knew about them? This is the role of the physical bookstore, which unfortunately is fast becoming an endangered species (thanks in no little part to Amazon and other internet booksellers). 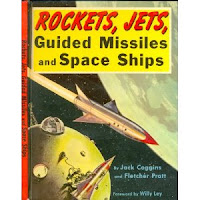 So I was happy this weekend to discover a brand-new used book and record store literally down the street from my house. Beech Tree Books and Records is located at 9 Maple Street in West Boylston, Massachusetts, less than a mile from me and just a few minutes drive from Worcester. They opened on July 30 and readily admit to being a "work in progress" as they continue to add stock to lightly filled shelves and record and CD bins. But I managed to find two "must have" books on my very first visit, including Rockets, Jets, Guided Missiles, and Space Ships by Jack Coggins and Fletcher Pratt, a 1951 (!) illustrated book for kids, with an introduction by Willy Ley! It's heavy on the V-2 (which was practically the latest in rocket technology at the time) but bravely delves into orbits, space stations, moon landings, and even the exploration of Mars and Titan. What a great find for a space geek like myself. One of my favorite paragraphs from this 60 year old book is from Ley's introduction (with quoted words as written):


What are the next twenty years going to bring? One of the great things to come is under discussion among scientists right now. It is the "orbital rocket," a small rocket which will circle earth outside our atmosphere for "ever." This means, of course, "for a very long time," months, years, decades, possibly centuries. Such an orbital rocket would not carry any people but only instruments, instruments of the type which can be "read" from a distance because they are coupled with an automatic radio transmitter and continuously broadcast their findings.

Beech Tree Books and Records is already a great little store with a lot of cool books, records, and CD's already on display at very reasonable prices and with more on the way. If you're in or near central Mass. and you like books, you should definitely check out this store.
Posted by FlyingSinger at 2:41 PM