Considering that this started out as something of a "space blog," it's odd that I haven't actually written about space in quite a while. Of course my tag line gives me a pretty wide charter: "Space flight, simulators, astronomy, books, flying, music, science, education: whatever the obsession of the moment might happen to be." And for the last couple of years, I've been occupied with other things, such as music and travel (not to mention work). So it goes.

But I really am still quite interested in space, even if I'm not writing books about space flight simulators (simulated Mars Direct mission in Orbiter shown in picture above) and attending space conferences as I did a couple of times back in 2006 and 2007. Two weeks ago, I made a special effort to go see the space shuttle Endeavour at its new museum home in Los Angeles. And I continue to follow developments in private space with great interest, including the accomplishments of SpaceX and its founder, Elon Musk, whom I heard speak at the Mars Society conference in Washington in 2006: Today I was reading the tenth anniversary edition of The Space Review, a weekly roundup of space related articles published by Jeff Foust (congratulations Jeff!). One of the articles is "Can Elon Musk retire on Mars in 2023?" This is something I had heard about back in 2010 but mostly had forgotten. Musk told a newspaper interview that he planned to retire to Mars (not for a while I suppose, as he is only 41). Really? Could that be possible? I mean, I know Elon has had long-term goals for Mars and for human expansion into the solar system. But how soon could there be something on Mars that one might retire to?

Maybe sooner than we might think if Mars-One has its way. I had not heard too much about this Netherlands-based private organization, but they've got some big plans, including the start of Mars colonist selection in 2013. Whoa, that is now! It's pretty wild and I don't know whether their "Mars colonization as a global reality TV show" could really work for funding. But they are thinking big by thinking small, as in, don't assume any major technological breakthroughs. Plan to use what we know how to make and do now, including rocket boosters from SpaceX, and various technology developed and used for the International Space Station. They claim it is indeed possible. 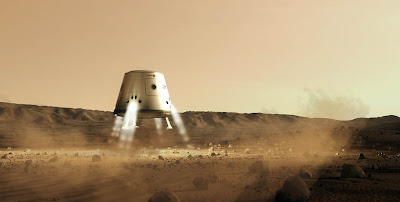 If they stay on schedule, they will launch a Mars communication satellite and a first pre-supply mission in 2016 (above), and land the first four colonists on Mars in 2023 (one major simplification of their humans-on-Mars program is that all trips are one-way, not round trip - if you go, you plan to stay). Four more colonists will land every two years in the initial plan, though other short-term colonization proponents believe that a viable colony will need to (and could) grow faster than this. By the time Elon reaches a still youngish retirement age of say 60 (in 2031), perhaps there could be a few dozen to a few hundred colonists he could join in a small Martian town.

I certainly believe that it's a good idea to expand humanity into the solar system, in part to provide a genetic backup of sorts in case of some unexpected disaster on Earth. And I would really be excited to see a private humans-on-Mars program starting as early as 2023 - just ten years away! I may be getting ready for retirement around then myself - but unlike Elon, I don't plan to join a Martian retirement village. I will enjoy watching from afar (I hope there's a virtual reality feed I can subscribe to), but I'm rather attached to Earth and many of the people who share it with me. I think I will just stay here and re-read some of Kim Stanley Robinson's novels like Red Mars and 2312.
Posted by FlyingSinger at 11:42 PM

Who would volunteer for a one-way trip to Mars? Would you only send hardened criminals there? Would it become "Marstralia"? Lots for me to think about... in my easy chair.

Supposedly there is no shortage of people willing to make the Red Planet their permanent home and final resting place as long as there is some minimal infrastructure available to allow survival. Most of them have blogs. Look around. I'm not sure I would want to hang around with many of them (not the only reason I'm staying here!). It appeals to some people who feel that the Earth is a bit too crowded, and a bit too regulated for their taste. It's the far frontier. It hasn't been done to death. It will probably even have internet service. I think a colony size of 4 to 22 over the first 12 years is a bit too limited, but I assume people would figure out how to get more people there in each stage once a foothold is established.

When you think about people who set off from England or Spain in the 15th-16th centuries, they were pretty small communities, whether intending to launch a colony somewhere, or to try to sail around the world. Of course they knew there would be air, water, and probably something you could pick or catch to eat wherever they went, and Mars is not so well equipped. But now we have technology, including long-distance communication. So Mars settlers would not be completely cut off from the rest of humanity. There have always been adventurers and pioneers willing to accept some hardship for a chance at... something. Fame, fortune, glory.

I can't imagine going myself, but I could imagine some sane people who would go, just for the chance to start a new chapter in the history of humankind. Have you ever read KSR's "Red Mars?" It's quite good. "Green Mars" too. But I couldn't finish "Blue Mars." Super far futurish.