Some space advocates decry the fact that humans are currently "stuck in low Earth orbit." While I too would love to see humans branch out to the Moon, Mars, the asteroids, and perhaps further, I have to say that low Earth orbit is still a pretty cool place to be. Case in point: I recently learned that the current ISS commander, Canadian astronaut Col. Chris Hadfield, frequently posts pictures from the ISS on Twitter and Facebook. So I "liked" Col. Hadfield on Facebook, and I now receive daily reports and photos from the ISS. Pretty amazing stuff (you can also see his pictures on Tumblr). 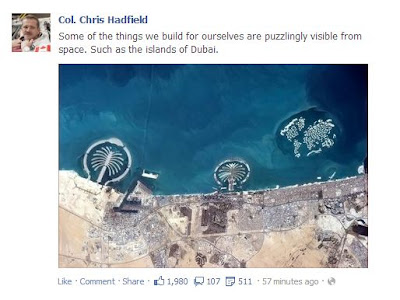 I also found a wonderful video compiled from ISS photography, including time-lapse views of auroras and other beautiful images of Earth. Christoph Malin's "Making the invisible visible" is a 15 minute video that is described as "a tribute to the International Space Station Program as well as Dr. Don Pettit, NASA Astronaut and ISS Astrophotographer." The screen shot below is from the video, looking north over New England (notice the hook of Cape Cod in the lower center). Also note the green aurora along the limb of the Earth. You should watch this video, preferably in HD. 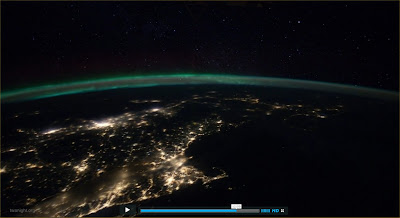 Posted by FlyingSinger at 8:02 PM