I just bought Apple TV and connected it to our HDTV. Coolest thing ever. With my heavy stake in Apple i-devices, iTunes music, and even a few movies and TV series bought over the years, it's the perfect thing. I can stream music from iCloud through my living room stereo, share content from the iPad or iPhone on the big screen, view rented movies at full (1080p) HD, and much more. Great little $99 device with no additional subscription required. Much nicer web interface than the Panasonic BluRay player we have used up to now (and still may use for Amazon movies since Apple TV doesn't support those). 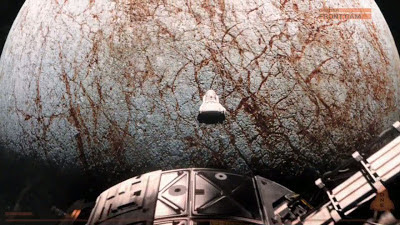 But I digress. The very first movie I rented through Apple TV was Europa Report, and I really liked it. It's an unusual situation that this first-run film is available on iTunes ahead of its theatrical release on August 2, but that works for me, especially with Apple TV.

Europa Report is mostly "hard SF," my preferred SF genre. The science and the technical treatment of human space flight on a long interplanetary mission are mostly realistic and quite well done, on par with 2001: A Space Odyssey. It's a planned 3-year mission to explore the surface and sub-surface of Jupiter's icy moon Europa. The space-station like spacecraft is fairly large and has a rotating component to provide artificial G in the crew quarters. The six person crew (4 men, 2 women) works well together, though they experience tension, boredom, isolation, and other mundane effects of a long mission in a cramped environment (the movie is only 90 minutes, but the production manages to convey the length of the mission pretty well). They also experience a number of crises, which also mostly seem realistic, triggered by events such as a solar storm, equipment failures, and accidents.

I won't give away any key plot details, but as the picture above suggests, they do reach Europa, their crewed lander reaches the surface, and they are able to drill through some 2.7 km of ice with a probe that sends back video and data from a sub-ice ocean. I will let you see the movie to find out what they learn and what happens. It's pretty dramatic and exciting. 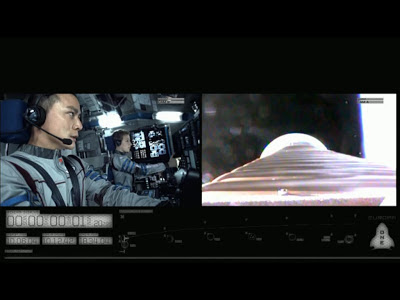 I do have a few minor complaints. Why does a lander intended only for non-atmospheric use have deployable landing gear? Why would they not follow better safety and backup procedures on EVA's? I won't say more lest I reveal plot details, but some of the dramatic events seemed preventable to me if certain common sense procedures had been followed. Of course it's a movie, so dramatic events are needed. And these are minor complaints - on the whole, this movie required much less suspension of disbelief than 90% of the space movies I have seen. There is serious consideration given to zero-G, radiation, crew psychology, communication delays, spacecraft operations, and much more, all in the context of a good story with real-seeming characters. Multi-year spaceflight seems much more of a tough job than an adventure in this movie, though the adventure part is definitely there (sort of like the old saying about war - long periods of sheer boredom interspersed with moments of stark terror).

I would give the movie 4.5 out of 5 stars if I were one to give stars to movies (and BTW, there are no "stars" in this movie - the actors are all unknowns to me, but they do a fine job).
Posted by FlyingSinger at 12:45 PM