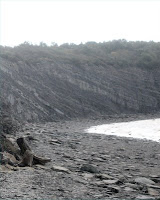 On a brief driving vacation to New Brunswick and Nova Scotia, we got to make a side trip to a 300 million year old tropical forest. Of course it’s a fossilized forest, but we were able to closely examine part of a large cross section of sedimentary rock that is literally teeming with fossilized remains of plants and animals. This is from the Carboniferous Era (359 to 299 MYA, million years ago) when most of the world’s coal was produced. The site is the Joggins Fossil Cliffs, and it was recently declared a UNESCO World Heritage Site. The exposed layers at Joggins represent a period between 310 and 300 MYA. 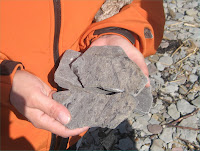 Joggins, Nova Scotia is a small village near the head of the Bay of Fundy, which is famous for its very high and very fast-moving tides. The tidal action wears away layers of the seaside cliffs, continuously exposing and releasing new fossils. It first came to wide scientific attention in the mid-nineteenth century. The famous English geologist Sir Charles Lyell (a friend and colleague of Darwin) and Canadian geologist Sir William Dawson visited the site and discovered fossils of amphibians and of the some of the earliest reptiles here in 1851 (the Carboniferous Period was of course many years before the dinosaurs which lived 220 to 65 MYA). 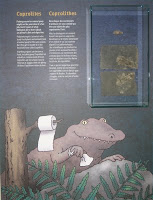 We didn’t see anything as dramatic as a reptile skeleton on the cliffs or on the beach, but we did see sections of preserved tree trunks and roots as well as some mollusk shells, fern leaves, a very large fish scale, and some coprolites (fossilized poop!). We might not have known this except for a helpful staff member from the brand-new Joggins Fossil Centre who was collecting samples on the beach. We learned more from visiting the Centre where many of the best fossils collected over the years are on display along with excellent interpretive displays.

It was pretty lucky the way the small land creatures were fossilized. Joggins had a lot of tree-like plants whose large trunks contained a spongy core. When the area was flooded and the settling sediment surrounded them, the cores would rot away, while the tougher “bark” would endure, eventually becoming coal. The tree shells were left in a standing position, and small animals would get trapped inside these hollow cylinders, allowing sediment to fall on them, which would sometimes preserve their bones as fossils. We are also lucky that the glaciers only left a 6-7 meter layer of debris on top of the present cliffs and did not completely scramble the 300 million year old layers below.

I visited another World Heritage site today, Old Town Lunenburg. This charming village on the south coast of Nova Scotia used to be a fishing center and a ship-building town, though now it is mostly known for tourism and art galleries.
Posted by FlyingSinger at 3:32 PM