Seattle from a Flying Beaver One of the coolest things we did in Seattle this past week was a 20 minute seaplane tour. We flew with Kenmore Air, which flies a fleet of seaplanes for scheduled, charter, and sightseeing service all over the Puget Sound region. We flew a De Havilland DHC-2 Beaver, one of the coolest planes ever. I requested and got the front right seat for the flight (there were only four passengers - the Beaver can seat six plus the pilot).

We took off from Lake Union (a 20 minute walk from our hotel near Seattle Center), flew east over the University of Washington and Lake Washington, then headed south along the eastern shore of the lake to Medina, where we saw Bill Gates' famous lakeside home (I missed it so I asked the pilot to circle back). Then we headed west for downtown Seattle, flying over the two sports stadiums (Safeco Field and Quest Arena, I guess) and then northwest along the Puget Sound waterfront. We got a good view of downtown Seattle, the Space Needle, and the Seattle Center area before turning southeast and back to land to the south-southwest on Lake Union. I was trying to enjoy the scenery, take pictures, and take in some of the pilot stuff, and it more or less worked. I sort of wish I could have heard the air traffic control for the pilot experience, but it was nice having the prerecorded sightseeing info (which must be GPS-driven because it seemed to know where we were even when Todd circled back to show me Bill's house). I plotted the approximate route on the map below. More pix on Flickr. 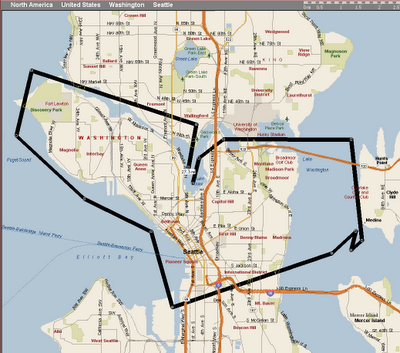 Posted by FlyingSinger at 12:53 AM