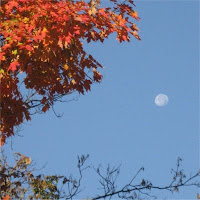 Sorry I haven't been blogging much lately. I've been busy with other things, one of which is finally finishing the tracks for the "fall 2009" release of my new album, "Message from Tomorrow." Yesterday Roger and I recorded the final new track (lucky number 13) which I just posted on MySpace. I wrote "Autumn Song" back in September, intending it as a simple folk-type song suitable for playing around with harmonies. Without going to the typical drum/bass rhythm track approach that we do on most songs, I asked Roger to see what sort of things he might add with electric guitars. He warned me that he'd been listening recently to Daniel Lanois (an artist and producer who I also like very much), and you can definitely hear that influence in the heavily delayed guitar parts, including some cool slide guitar work. All the vocals are me.

You can listen to or download "Autumn Song" from MySpaceMusic here.
Posted by FlyingSinger at 10:32 AM 1 comment:


NASA's WISE infrared telescope spacecraft is scheduled to launch this morning from Vandenberg AFB in California. WISE will perform an infrared all-sky survey at much higher resolution and sensitivity than any previous IR surveys. The bar is not very high on this, since NASA's previous all-sky IR survey satellite was IRAS which launched in 1983 with a whopping 62 detectors (of course other infrared telescopes such as Spitzer have higher resolution but are not suitable for all-sky surveys). WISE will capture everything that radiates in its wavelength band, from asteroids to brown dwarfs to galaxies, and there are bound to be surprises and dramatic discoveries as there always are when new technologies are deployed in space telescopes to look more closely at the universe. The video above is a great overview of the mission.

Note: If you follow this blog, you will have noticed that there hasn't been much to follow recently. I blame this on various distractions, some of which are necessary, and some not so necessary. Sort of a blogging recession. But hey, these things happen, and I hope to return to more regular blogging in early 2010, probably after February 12 when I wrap up an important company event that I organize every year around this time.
Posted by FlyingSinger at 8:42 AM 1 comment: