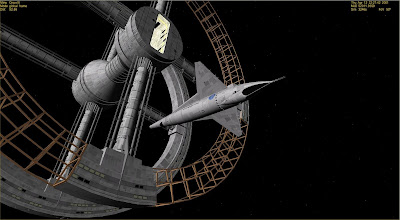 As I wrote recently in this blog and in an article in The Space Review, Orbiter 2016 was released in September. This is the first major release of this freeware space flight simulator since Orbiter 2010, and as I mentioned, not all of the many third-party addons for the 2010 version are working in Orbiter 2016. If you are familiar with Orbiter, you know that it's quite easy to have multiple installations of the software on the same PC, so there is no need to replace the 2010 version with the 2016 version -- as long as you have the disk space, you can keep multiple copies of both versions installed in separate folders and just run the one that has the features and addons of interest at the moment. In the picture pairs below, the top screenshot is from Orbiter 2010, the bottom one is from Orbiter 2016.

You should also know that although there are some user interface changes in the 2016 version, they are really quite minor, so even if you are new to Orbiter, you can install and use both the 2010 and 2016 versions quite easily. Some developers have already updated their addons for 2016, and others no doubt will when they have the time and inclination. But Orbiter 2010 is still readily available, so if you are interested in the Apollo program, the advanced Shuttle Fleet, the fictional spacecraft of 2001: A Space Odyssey (sample screenshot at the top of this post) or Colliers Magazine, and many other addons, there's no need to wait for 2016 versions to come along. Note that the final version of Orbiter 2010 is often called 2010-P1 (patch-1) or 100830 (August 30, 2010). 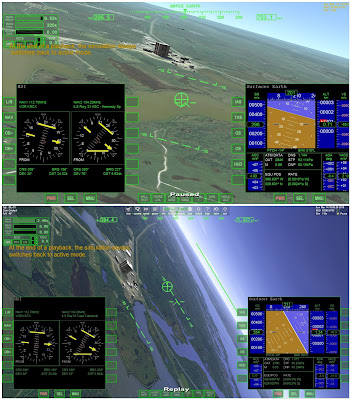 Here are some observations and tips for working with both Orbiter 2010 and the new Orbiter 2016:
1. The biggest user interface difference is that the "no-cockpit" full screen pilot view has a control bar that appears when you hover the mouse near top edge in the 2016 version. In the 2010 version, the F4 key will pop up a small menu bar with same controls (in the 2016 version, F4 will toggle the top edge menu between "on" and "auto-hide"). See "no-cockpit" comparison screenshots above. 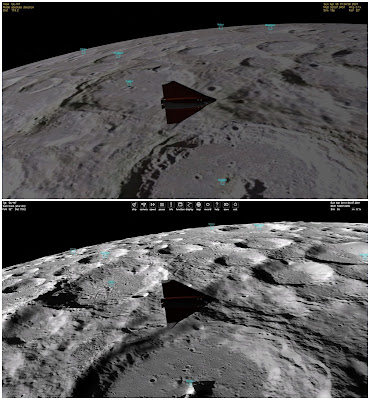 2. The biggest visible difference in the 2016 is in its support for highly detailed surface terrain data complete with elevations, so mountains and craters are true 3D objects. This makes for some incredible eye-candy especially when you are flying low over the terrain, but in most situations in Orbiter, you are orbiting (oddly enough) 200 km or more from the surface, and the flat 2010 terrain textures look just fine.
3. In addition to the general high-res 3D surface data for all of Earth, the Moon, Mars, and some other bodies, Kennedy Space Center (cockpit view above) and the Edwards AFB/Mojave region (see shuttle final approach screenshot below) have been given super-detailed makeovers in Orbiter 2016. Again, this doesn't matter much if you are in orbit or cruising to the Moon or Mars, but it does add a lot to the realism before you launch or when you are landing at Edwards AFB. 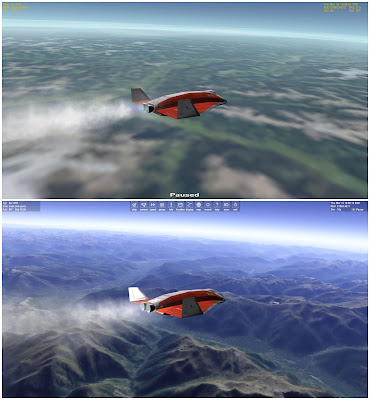 4. There is a thread on the Orbiter Forum that reports addons that are known to work in Orbiter 2016. There are quite a few and there are probably many others that have not been tested but may work. Orbiter Sound 4.0 works with Orbiter 2016 though there are a few minor glitches such as incorrect audio feedback for some actions (e.g., the G key for "landing gear" in the Deltaglider will deploy the gear but audio will say "radiator deployed").
5. Some popular addons that currently seem to work only in Orbiter 2010 include AMSO (Apollo program in great detail), Shuttle Fleet V4.8 (which is freaking amazing), and the excellent "World of 2001" and "World of Colliers" addons by "Sputnik." Note that even for 2010, some addons may only work with Orbiter's "native" graphics (not the D3D9 Orbiter_NG client which offers better graphics quality and frame rate). I'm not sure how to know this for sure, but if you find that your spacecraft are invisible in the D3D9 client, you should try the native graphics version. 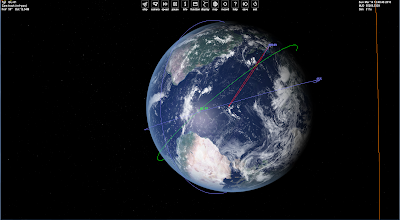 6. One addon I especially like is the videnie module for orbital path drawing by "artlav." It renders orbital paths for spacecraft, planets, and other bodies in exterior views (green, red, and purple lines around Earth in screenshot above from Orbiter 2010). This is super cool and very helpful in understanding orbital paths, but it only works in native graphics mode (not orbiter_ng) with Orbiter 2010.
7. If you have plenty of hard drive space available, a good general tip is to create two separate "clean" installation folders, one for Orbiter 2010-P1 and one for Orbiter 2016, including whatever terrain data you prefer, and perhaps with Orbiter Sound 4.0 installed. Make a copy of the clean installations and install any desired addons there. Note that Orbiter 2016 installations with full terrain data can be very large (I have one installation that is 58 GB).
8. Orbiter Sound supports mp3 playback with control over when the music plays (e.g., exterior views only). But since modern versions of Windows support multi-source sound multiplexing, I tend to just stream music from Amazon or iTunes while running Orbiter. An album of Strauss waltzes is a particular favorite, especially with the World of 2001 addon. 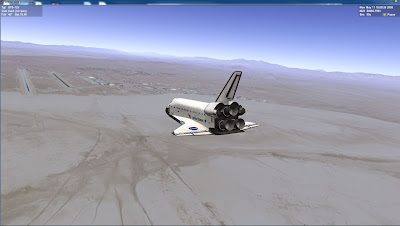 Note: The screen shots here are from Orbiter 2010 and Orbiter 2016, without modification. You can find them and various others in full screen resolution in this Flickr album.
Posted by FlyingSinger at 3:51 PM No comments: