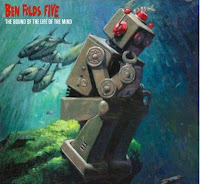 Another thing that's just great is the Rolling Stones new single "Doom and Gloom." Classic Stones rock with classic Jagger swagger and a funny but topical story line. The new album is yet another greatest hits collection (really?), but at least I could buy the single by itself on iTunes.
Posted by FlyingSinger at 8:48 PM No comments: 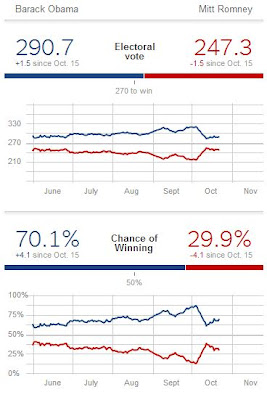 The other thing that helps is The Borowitz Report. Andy's often zany fake news articles are most often about Mr. Romney these days, such as this one on his belief in a woman's right to choose... what to make for dinner. I hope Andy doesn't have Mitt to kick around much longer.
Posted by FlyingSinger at 12:48 AM No comments:

In 2008, I became somewhat politically active for the first time since 1972, when I was in college and briefly campaigned for Senator George McGovern for president. I'm still a liberal, but it took eight disastrous years of George W. Bush and the frightening prospect of a McCain-Palin win to jolt me into action. Massachusetts was a safe bet for Obama, but New Hampshire wasn't, so I signed up to do phone calls as well as a couple of canvassing trips to the nearby Granite State. Obama ultimately took NH and of course the election.

This year I'm again worried about the possibility of a GOP win, and I have again made a lot of small donations to the Obama campaign, other Democrat-supporting organizations, and Planned Parenthood, though I haven't signed up for any phone banks or canvassing trips. I really don't like anything about Romney and Ryan, but I'm especially concerned about their positions on women's issues, and the effect that their likely Supreme Court appointments could have on the future of this country. I don't want my daughters and my new granddaughter to live in the kind of America that many in the GOP would like to see. It might not be as bad as the frightening Christian Theocracy that Octavia Butler imagined in The Parable of the Sower. But Romney-Ryan would certainly pave the way.

So I've been looking at polls and worrying about Romney's "bump" since the President's disappointing performance in the first debate. It's closer than I would like, and of course anything can happen in the next four weeks. But in the critical swing states, Obama is in better shape than Romney, and the Dems have quite a full war chest to counter the tidal wave of GOP attack adds. After handing the first one to Mitt, I'm thinking Biden and Obama will do much better in the remaining debates. So I am optimistic that Obama will pull it off.

I've been looking at Poll Headlines which is a quick way to look at a lot of polls in summary. They have a pretty cool electoral map where you can fill in the toss-up states to make your own prediction of the electoral college results. Today it is showing Obama with 225 strong and 32 leaning (it was 257 strong a week ago, ouch). Romney has 191 strong and 15 leaning, and there are 75 votes shown as a tossup. So it can still go either way, but here is my guess for how it will end up, based on recent swing state results: 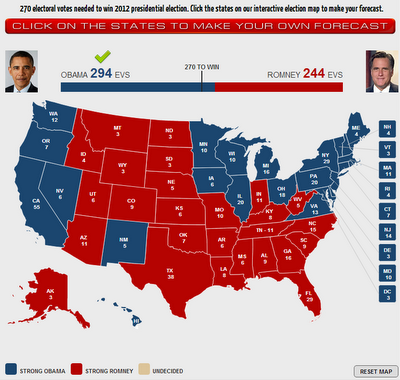 UPDATE (10/18/12): Obama won the second debate - not as important as losing the first, true, but it has energized his supporters, and the Obama campaign's fund raising and ground game in swing states look very strong. I think Romney's views on women were clearer in the second debate - and not favorable to him. Same with Romney's views on immigration - I'm guessing he will lose ground with Hispanic voters in swing states. It's far from over, and the nationwide popular vote will probably be very close. But this is my revised guess for the electoral outcome. Pretty much the same except for Colorado, now blue: 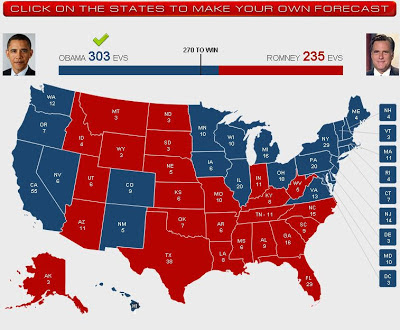 Posted by FlyingSinger at 9:49 AM No comments:

Orbital Tour of the Earth at Night 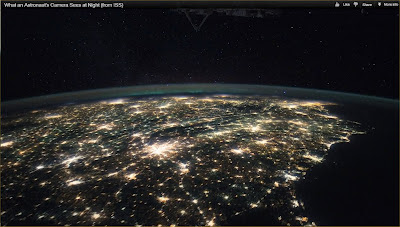 This NASA video is amazing and beautiful. A narrated tour of various areas of Earth at night as seen from the orbiting International Space Station. The frame above shows the southeast United States, with Atlanta showing as the brightest area near the center. This narrated daytime tour is also quite spectacular, with a much slower pace since so many more surface details are visible in daylight. View these in HD!
Posted by FlyingSinger at 8:39 PM No comments: