I was looking back at some old blog posts to see where I was in November 2008 when President Obama won his first term (that's the real purpose of this blog - outsourced, searchable memory!). I was in Salzburg, Austria, teaching a CODE V class during a gorgeous stretch of weather. Not bad duty, actually, except for being far away from home for an election in which I was very engaged. I remember my brother called me at 3 am local time (9 pm on election day in New York) to talk about the results that were just starting to come in (he didn't know I was in Europe). I wasn't sleeping very well anyway and had planned to get up at 4:30 am local to check the status (10:30 pm EST). I think I managed to watch Obama's victory speech live on CNN (I watched this year's on YouTube after the fact, in Tokyo). 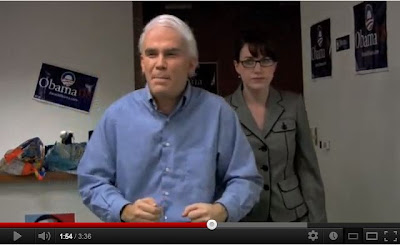 I was surprised to find that this 2008 campaign video was still up. Obama campaign workers in Chicago mouthed the words to "One More Day" from Les Miserables. They had stand-ins for John McCain and Sarah Palin (shown above), singing about how the revolution will be crushed. Fortunately the election turned out better than the plot of Les Mis!
Posted by FlyingSinger at 9:12 AM No comments:

So what is up with Apple's new iPad mini? Isn't it pretty much a shrunken iPad 2 with neither a hi-res Retina display nor Apple's latest and fastest processor? It's really not much of an advance. More of a gimmick or a blocking move vs. 7 inch Android tablets. Who would buy such a thing? Um, me.

Why? Earlier this year I bought an iPad 3 for the family. I pledged that it would be a stay-at-home iPad, and I would continue to use my 4G iPod Touch for on-the-road music making (and listening). I have kept that pledge, but as I have used the iPad at home for songwriting and making demos, the Touch has gotten to feel very small. Hard to use those tiny keyboards and recording app controls. Slow. Memory problems. In the meantime, my wife has found that the big iPad is ideal for some of the work she is doing, and she uses it a lot. Plus I rationalized that an iPad would too big for my already heavy computer bag when I travel. So I would muddle through with the Touch. 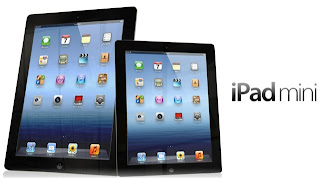 Enter the mini. A 7.9 inch, 1024 x 768 display that matches the resolution of the iPad 2, so thousands of apps work perfectly from day one. Light weight (Wifi-only version is 0.68 lbs. or 308 grams). Easy to hold in one hand. Travel friendly. So I ordered a 32 GB Wifi version as soon as I could (my iPod Touch will still by main music listening machine).

So far, I love it. Due to its light weight, it's better than the full size iPad for reading magazines and the NY Times (though I still use the iPhone app for NYT because they charge a lot more for the iPad subscription). It's great for all my music making apps (GarageBand and various synths). It's also great for email, web browsing, and blogging (like now).

I do notice the somewhat coarser screen resolution (163 pixels/inch) compared to the iPad 3 (264 ppi). But it really doesn't bother me when I read magazines or web sites. The new "Lightning" connector is annoying in that it doesn't work with Apple's own camera connection kit (even with Apple's own expensive adapter). I haven't tested the audio and MIDI interfaces I have with the adapter yet - hope they work (tested last night - they both work fine). But overall I'm very happy with the mini and look forward to using it on my next long airline trip.

Posted by FlyingSinger at 11:00 PM No comments:

How I Spell Relief 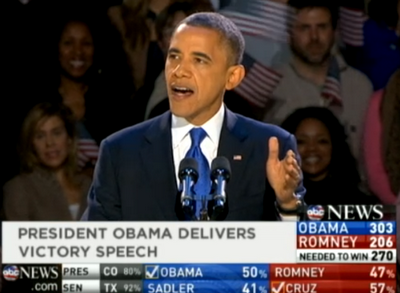 If this blog is about anything at all (and with so little posting recently, it's hard for me to tell), it's really not about politics. Except (very rarely) when it is. This may not be the last political post until the next presidential election, but it may be.

In any case, I'm enormously relieved and happy that President Obama won re-election yesterday. I really believe that after spending four years helping us dig out of an enormous hole, that we are going in the right direction, and that President Obama definitely deserved another term. Mitt Romney was the wrong guy with the wrong message (to name just a couple of wrong things about Mitt, not to mention his scary running mate).

At the moment, Florida still has not been called, but with over 97% counted, Obama still has a pretty good lead. But whether it's 303 electoral votes or 332 doesn't matter much. It's enough of a margin that we won't have any 2000 like drama.
Posted by FlyingSinger at 9:36 AM No comments: