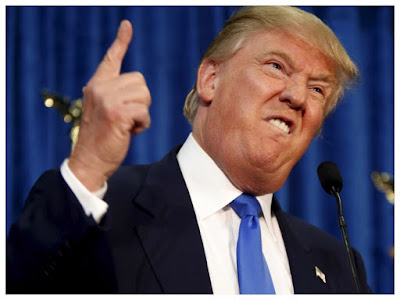 My interest in politics right now is pretty low, and the 2016 presidential election still seems a long way off. So I don't often think much about it, and I rarely blog about politics (heck, I rarely blog at all these days -- though I write a lot in my journal). But the 16 ring circus that is the fight for the Republican nomination is pretty hard to avoid, especially when my wife watches MSNBC and I occasionally sit in. Rachel Madow and other MSNBC commentators have been having a field day with the motley crew of Republican contenders. But since Donald Trump announced his run for the presidency in June, he has made their jobs even easier and has dominated every news cycle with his ever more ridiculous shoot-from-the-hip pronouncements.

He started with Mexicans and immigration, claiming that most illegal immigrants are rapists and drug dealers. He says that when he is president, he will build an impenetrable wall along the border with Mexico, and force Mexico to pay for it. Then the other day in an interview on stage, he ad-libbed some remarks about Senator John McCain and how he isn't really a war hero, followed by, "OK, maybe he is, but only because he was captured. And I like people who weren't captured." I'm definitely no fan of John McCain, but anybody who does not respect the service and sacrifice of a naval aviator who spent five years in a Vietnamese prison is insane and despicable. Though of course we already knew that Trump was insane and despicable. Yesterday he went on the rampage against some of the other Republicans who have insulted him in the press, especially Senator Lindsey Graham of South Carolina. Speaking to an audience in South Carolina, Trump insulted Graham as a loser and a wimp and actually gave out Graham's private cell phone number to the crowd.

Trump's form of campaigning is basically improvised insult comedy -- Don Rickles with more money and a creative hair stylist. It's only a matter of time before everyone, no matter how conservative, realizes what a toxic waste dump he is. It's hard to understand how he can achieve 16% in any poll of anybody, Republican or not (some suggestions here). Someone pointed out on a show last night that four years ago, Sarah Palin (not even running), Rick Perry, and Michelle Bachmann were leading in Republican polls at this point (summer 2011, ahead of the 2012 election season). Romney and Santorum were far behind. In spring 2011, Trump himself was actually leading in the polls. I don't recall when he bowed out of the 2012 race that Mitt Romney ultimately won for the GOP nomination. So his strength in the polls at this time really means nothing, except that under the crazy rules set by FOXNews, national poll position will determine which 10 of now 16 Republicans will get to participate in the first GOP debate on August 6. So Trump will be on stage that night, making the Republican debate even more bizarre than it would be with only "serious" candidates.

As comedian Andy Borowitz has written, Trump is the first openly asshole presidential candidate, and there apparently are a lot of assholes in the country who are rooting for him. He is not a serious presidential candidate, and he certainly knows this himself (I read somewhere that he's only spending 50% of his time on his presidential run because of his business commitments). But Trump is an entertainer who thrives on any sort of publicity, and that is what he is getting now by the ton. The good news is that it disrupts the GOP. The bad news is that he makes somebody like Jeb Bush almost look like a reasonable person. Almost.
Posted by FlyingSinger at 9:59 AM No comments: 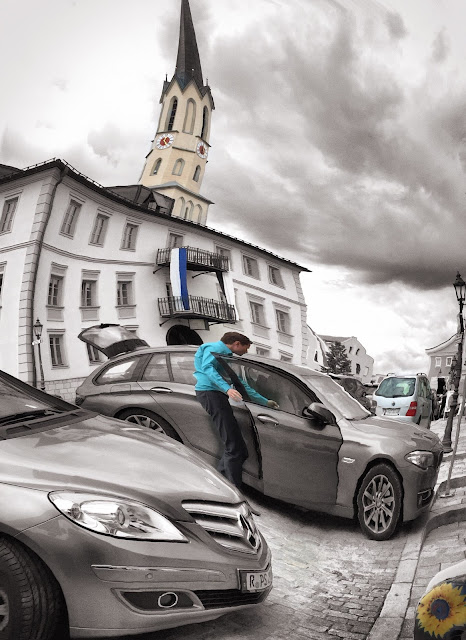 This is an interesting essay by a Nobel Prize-winning physicist, Frank Wilczek, “How Physics Will Change—and Change the World—in 100 Years.” A pretty big topic! Can you say anything definitive? Not really, but it reinforces something I have thought about sometimes, that we are nowhere near the finish line in understanding the universe. One hundred years ago, quantum physics and relativity had just arrived. At least now we know better how far things can be from what they seem. But we may still be closer to Jon Snow (“You know nothing!”) than to God. A few points from the essay…
Newtonian physics is a system outside time that describes how things change from some set of initial conditions. This is practical and helpful for lots of problem solving and engineering, but not fundamentally satisfying from a God's-eye view:
For the answer, “Things are what they are because they were what they were,” begs the question, “Why were things that way and not any other?”
Einstein 's space-time integration helps:
In the light of relativity theory, the God’s eye view seems, much more natural. There, we learn to consider space-time as an organic whole, whose different aspects are related by symmetries that are awkward to express when experience is carved into time-slices. Hermann Weyl expressed this memorably:
The objective world simply is, it does not happen. Only to the gaze of my consciousness, crawling along the lifeline of my body, does a section of this world come to life as a fleeting image in space which continuously changes in time.
He also foresees further integration of physics and information and life and mind:
In 100 years, biological memory, cognitive processing, motivation, and emotion will be understood at the molecular level. And if physics evolves to describe matter in terms of information, as we discussed earlier, a circle of ideas will have closed. Mind will have become more matter-like, and matter will have become more mind-like.
He also has a lot to say about technology, though in broad terms, such as vast expansion of computational chemistry (something I briefly worked on at a very primitive level in high school with my NSF Summer Science Program professor in Ohio, simple molecular orbital calculations). Better computers, quantum computers, robotic control of matter to build anything, AI, and even better human senses:
Human perception leaves a lot on the table. Consider, for example, color vision.
Whereas the electromagnetic signals arriving at our eyes contain a continuous range of frequencies, and also polarization, what we perceive as “color” is a crude hash encoding, where the power spectrum is lumped into three bins and polarization is ignored. Compared to our perception of sound, where we do a proper frequency analysis and can appreciate distinct tones within chords, it is impoverished. Also, we are insensitive to frequencies outside the visible range, including ultraviolet and infrared. Many other animals do finer sampling. There is valuable information about our natural environment—not to mention possibilities for data visualization and art—to be gained by expanding color perception.
Modern microelectronics offers attractive possibilities for accessing this information. By appropriate transformations, we can encode it in our existing channels in a sort of induced synesthesia. We will vastly expand the human sensorium, opening the doors of perception.
Now the LHC at CERN is coming back online with even higher energy than the levels that finally outed the Higgs Boson. Some mysteries may be solved and others created. Will advanced physics research lead to advanced technologies that make use of space-time and quanta as we see in SF books and movies like Interstellar? I don't know, but nearly every past breakthrough in physics has led to some new technology. I hope I can stick around long enough to see some of this crazy next chapter of the Adventures of the Human Neocortex.