One of the great things about virtual stuff is that it doesn't take up much room. Take my fleet of airplanes, for example. Microsoft Flight Simulator starts you off with a pretty decent set of flyable airplanes, from the trusty Cessna 152 I used to learn to fly in real life to the Boeing 787. The "Premium Deluxe" edition includes 34 different planes, ranging from ultralights to general aviation standards to business jets and airliners. A recent update even added a jet fighter, the Boeing F/A-18E Super Hornet, but there is no air combat support (there are other simulators for those who like to blow stuff up). 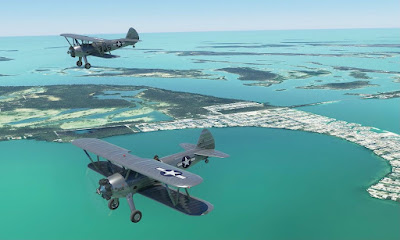 Surely 34 airplanes is more than anyone can fly, right? Perhaps, but that doesn't stop third party developers from creating even more. I have bought quite a few of them and downloaded even more from freeware developers, some of whom do amazing work. I do like to fly a few of the standard planes, though I am not much into airliners and business jets. I tend to favor general aviation planes, bush planes, warbirds (older military planes, mostly props), and military jets. So in no particular order, here are twelve of my favorite planes for Microsoft Flight Simulator.

1. Cessna 172: The 172 is a classic, essentially a four-seat version of the Cessna 152 I used to really fly. It's quite easy to operate, and I usually choose the "glass cockpit" version with the big color screens of the Garmin 1000 navigation system in place of the classic "round dials" for airspeed, altitude, etc. The Bushtalk Radio livery is promoting a cool free add-on that provides audio narration for thousands of points of interest around the world as you fly near them.

2. Cub Crafters XCub: The XCub is an updated version of the classic Piper Cub which I first flew as a Civil Air Patrol cadet back in 1967. I like the screenshot above which reminds me of how we would fly the Cub with the door open on warm days. My mother didn't like that but she still let me fly. The image at the top of this post is the XCub fitted with amphibious floats, flying near the Golden Gate Bridge.

3. PT-17 Stearman: The Stearman is a true classic, a tail-dragger open-cockpit biplane that first flew in 1936. It was a standard trainer for the US Army and Navy in WWII and was used for many years as a crop duster. It is capable of aerobatics, and I was fortunate enough to experience this myself on a flight in Chino, California in 1996, before I had started my flight training. The DC Designs model in Flight Simulator feels pretty real and has great sounds, including the creaking sound you get from the wing braces when you pull G's. Two silver PT-17's are also pictured above flying near Key West, Florida.

4. Aermacchi MB-339A: This Italian-made jet trainer by IndiaFoxTecho was the first paid add-on I got for FS2020 and it's still one of my favorites. It's got old-style "round dials" and support for traditional navigation methods like VOR (but no screens). It's not the fastest jet but it's very maneuverable and has been used by the flight demonstration team of the Italian Air Force as shown in the screenshot above, flying in the Swiss Alps.

5. Beechcraft Bonanza G36: The Bonanza G36 is a modern version of a low-wing general aviation plane popular for many years. It's got the same avionics system as the Cessna 172 (Garmin G1000) but it has a more powerful engine and retractable landing gear, making it a lot more speedy. I would love to have a real one!

6. Supermarine Spitfire Mk. IX: The Spitfire is one of those airplanes that can justifiably be called iconic. First flown in 1936, it was one of the heroes of the Battle of Britain in 1940, alongside the Hawker Hurricane. I don't fly the Spitfire in the sim as much as many other planes, in part because it is realistically tricky to land and handle on the ground. But every time I fly it I realize it's one of the most beautiful machines ever made, and Flying Iron has recreated it in fine detail.

7. Top Rudder 103 Ultralight: I have never flown an ultralight in real life and I'm not sure I would. I bet it would be great fun, but I like the feeling of a fuselage and windows around me, not just a lawn chair with a seatbelt and a bunch of metal tubing. But in the sim it's great for when you want to get low and slow and explore the scenery. Here I was flying over the Cerne Abbas Chalk Giant in Dorset, England.

8. Daher Kodiak 100: This is my latest toy, a single-turbine-engine, short-takeoff-and-landing utility plane that I first learned about from the great YouTube videos of Missionary Bush Pilot in Papua New Guinea (PNG). Ryan flies passengers and cargo to remote jungle airstrips in all sorts of conditions while calmly explaining it all to his YouTube fans. So I was very excited when this plane was announced for FS2020, and SimWorks Studios has done an amazing job simulating the many details and the flight characteristics. The interior is pretty nice too (see image at end below).

9. General Dynamics F-16 Fighting Falcon: The F-16 is one of my all-time favorite airplanes and was the very first one I ever experienced in a flight sim, way back in 1994 with Falcon 3. I also spent time with the much more detailed Falcon 4.0 late in the 1990's. Those were combat flight sims and though I wasn't all that great at air-to-air or air-to-ground, it sure was fun. This version of the F-16 by SC Designs is visually amazing and flies very smoothly. It can carry weapons but they are for visual effect only. In the screenshot above, a two-seat F-16D is making an uncomfortably low pass over the mountaintop Haleakalā Observatory in Maui, Hawaii.

10. Grumman Goose: Although I am not big into water sports or boating, I've discovered an unexpected love for amphibious float planes since FS2020 came out. Several of my smaller single-engine favorites such as XCub and Cessna 172 have float options, as does the recently added Pilatus PC-6 Porter turbine single. But I also love this freeware version of the classic twin-engine Grumman Goose which first flew in 1937. Sure it looks like a cartoon airplane, but it's really fun to fly.

11. Lockheed-Martin F-22 Raptor: This is another surprisingly good freeware airplane. It's very fast and easy to fly. The real one is also supposed to be easy to fly, which it should be at something like $300 million per plane. It's also pretty in menacing predatory reptile sort of way.

12. Nieuport 17: Number 12 already? How can I leave out the P-38? The P-40? The Long-EZ? The T-45C? The Hawk T.1? All the beautiful Diamond airplanes? All the business jets and airliners? The truth is I rarely fly biz jets or airliners. I'm more a VFR-fun-flying kinda guy, though I do enjoy planning a longer IFR flight now and then. But my final entry is a French sesquiplane (one-and-a-half wings) that first flew 105 years ago, in  January 1916. Only replicas of this classic WWI fighter exist today, but Big Radials made a very nice virtual model that's quite fun to fly, especially in VR.

Interior view of the Kodiak 100 parked at the airport at Milford Sound, New Zealand.