I've been virtually exploring many cool areas in Africa and Europe with the help of a new series of VFR flight plans for Microsoft Flight Simulator, MiGMan's World Tour. They include a large number of locations with richly illustrated guides to help you decide where to fly next. The flights are fairly short (depending on the aircraft you choose) with an emphasis on the scenic and the unusual in the huge, detailed world of MSFS. 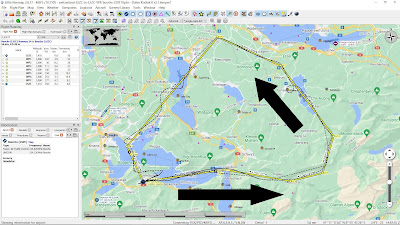 I made a new video (music by me) from a series of screen captures done on two flights around Lake Lucerne, Switzerland, both based on the same flight plan from MIGMAN'S FLIGHT SIM MUSEUM - EUROPE VISUAL VOL. 4. I first flew the plan in the "wrong" order, crossing icy Lake Lucerne to the east at fairly high altitude, and with Live Weather - lots of snow and frozen lakes in January. Then I flew it again in the published way point order, this time at low level, with "cloudy horizon" weather and with the date set to late fall. So different! Here's another version, full video flown and narrated by MiGMan. 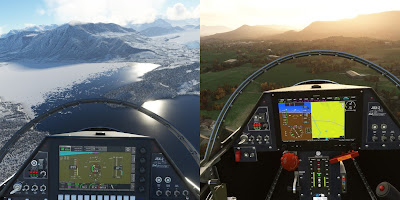 I was using Bijan's Four Seasons addon to add variety to the vegetation, as well as addons for powerlines and lifts (ski lifts and cable cars are everywhere in Switzerland). You can see those (and avoid them) when flying down low. I was in VR which makes it easy to judge your position when flying low in valleys and around obstacles. I chose a new aircraft I just bought, YSIM's SubSonex JSX-2 “personal jet” which is really fun in VR. A cozy little jet. I might build one!

MiGMan’s World Tour series has many great flight routes throughout Europe and Africa, so there’s no special need to fly the same one twice. But as you can see from these screenshots and especially in the video, changing the weather, the altitude, and the direction brings out different aspects of the beauty of Switzerland’s mountains, valleys, lakes, and towns. I also enjoy getting familiar with the terrain as I explore an area from different perspectives. So the “replay value” of these flight plans is excellent.

Of course Switzerland is amazing and these flights show that well. But there are hundreds of less famous but still beautiful places all around Europe and Africa, and this series has surprised me many times with unexpected wonders. If you love geography as I do, Microsoft Flight Simulator is the biggest and best playground ever, especially if you also like airplanes (as I apparently do).

Microsoft points out that you can fly anywhere in the world, but as with real-world travel, it’s helpful to have an experienced guide who can lead you to incredible places you might never think to visit otherwise.

Posted by FlyingSinger at 11:01 AM No comments: