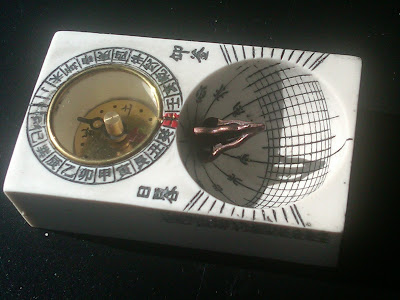 Last week I hosted my company's annual international distributor meeting. One of my Korean guests was kind enough to bring me a small gift, something I had never seen before, a pocket sundial modeled on an ancient Korean sundial called Angbu Il-gu ("cauldron-like sundial"). According to this (what else?) Wikipedia article, the original version of this sundial was invented by Jang Yeong-sil and other Korean scientists sometime in the 1400's during the early Joseon Dynasty.The picture at the bottom of this article shows what the much larger original looked like (museum photo from Wikipedia Commons, courtesy Bernat).

The pocket sundial fortunately included some English notes, explaining that the 13 lines that are roughly perpendicular to the pointer are seasonal lines. The far right line is the winter solstice (lowest sun, longest shadows) while the leftmost line (aligned with the tip of the pointer in my photo) represents the summer solstice. Today is just about two months past the winter solstice, and the shadow's tip touches the second line. The lines that are roughly parallel to the pointer are time lines (half-hour increments), with the longest (center) line representing noon. This picture was take at 12:36 EST, and the shadow is well short of the 12:30 line, but the instructions also mention that some adjustment is needed for longitude, though the English explanation of this isn't very comprehensible. They also didn't mention the use of the compass, but I knew enough to align the red end of the compass needle with north.

I was surprised to get such a cool little gift, although I think my Korean friend knows that I have an interest in astronomy (or at least optics). I was also surprised that it is sunny enough today to test it! 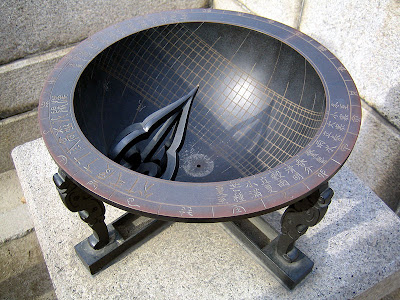 (looks like this was taken right around the same month and time of day as my photo)
Posted by FlyingSinger at 1:20 PM No comments:

From Bozo to Watson

I’m right on the cusp between insanely busy and merely crazy busy at work. So I thought I would take a breath and write a blog post, inspired by an amazing app I just bought for the iPod Touch.

Wikipedia may have its faults, with user-created content that often needs to be taken with a grain of skepticism. On the other hand, if you have an internet connection, it’s an incredibly broad collection of entry-level (and often in-depth) articles on just about anything you can think of. But what if you don’t have an internet connection? That may seem like a rare condition for many of us, but when I wrote this, I was on an airplane with no Wifi or mobile phone signal. Back on the ground, I walk around with an iPod Touch which provides excellent web access whenever I have a Wifi signal. I also have a BlackBerry “smart phone” which is great for email and which theoretically provides web access whenever I have a 3G signal. I say theoretically because the BlackBerry’s web browser totally sucks – it is slow and unable to load most web sites because it says they are “too big.” What’s an information junky to do?

The solution: clear 3 GB of space from my iPod Touch and spend $10 on an app called Wikipedia Offline, and voila, now I’ve got the whole English language Wikipedia in my pocket. More precisely, I have the main text for the entire Wikipedia as of September 2010. By default there are no pictures, though when you are online, you can download the latest version of any article and optionally save it with pictures (as I have shown here - you can also touch the globe button to display the full online version of the article you are viewing). The links to other Wikipedia articles are in there, as are many web links, but none of the “editorial” material that might help you judge whether the information is reliable or not.

Other than those limitations, it’s pretty much all in there, from Bozo the Clown to Watson (the AI program that recently defeated two human Jeopardy game show champions – I updated the article to include recent information on that televised match). And everything in between (A, X,Y,and Z entries are in there too). Orbital elements. Orbiter. Fluffernutter sandwiches. Jayne Mansfield (she did die in car accident, but she was not decapitated). Elton John. A wide range of obscure musical acts (not me, I’m too obscure even for Wikipedia), albums, and movies. Battle of Britain (battle, movie, flight sim, airfields, memorial, etc., etc.).

How is this possible? I mean, 3 gigabytes is a lot of data, and the file is heavily and cleverly compressed. But jeeze. The first movie on my flight was the recent animated film Megamind so I looked it up. It’s in there, with cast and plot summary, although it is listed as forthcoming since the main database is from September 2010. This whole offline Wikipedia thing is really quite astounding.
Posted by FlyingSinger at 10:12 PM No comments: