What If Space Really Sucks? 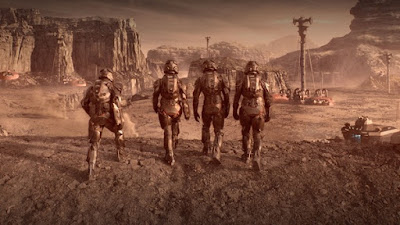 I read an interesting essay on The Space Review by Dwayne Day, titled “Mars ain’t the kind of place to raise your kids,” quoting Bernie Taupin in Elton John's song “Rocketman.” That 2017 essay was inspired by the SF TV series The Expanse, which is now in its third season (I bought the first season and watched a couple of episodes on Amazon Video -- I liked it but never returned to it since it’s not my wife’s thing and I have so many other time sinks). He doesn’t talk too much about The Expanse except to describe it as “gritty” and to say that it depicts a settled solar system a few hundred years in the future, and guess what? There’s politics and war and crime and inequality and oppression of asteroid colonists by Earth and Mars people, and resentment of Earth by Martians who are struggling to make their planet livable, and not just a place defined by its independence of Earth. There are many other problems too, e.g., agriculture collapses on Ganymede because the engineered environment is not as robust as natural environments of Earth. This is something that Kim Stanley Robinson addresses in his colony-starship novel Aurora  which I read and wrote about back in 2015 and found really fascinating (as I do most of KSR's books).


I guess the bottom line is that people are people, and that moving to Mars or a space colony or anywhere is no magic bullet. If there are multiple people anywhere, there will be conflicting needs, priorities, goals, etc. that will need to be managed. Even if you build a seemingly robust, prosperous, and somewhat fair and democratic society like the United States, it won’t be prosperous and fair to all its people, and a scam artist like Donald Trump can come along and try to ruin it for everyone except himself and a few of his wealthy supporters and Russian friends. That’s our now. I don’t think Trump will ultimately succeed in ruining the American Experiment, but he might (or he might drag us into wars that will screw up everything for everyone).

To me, space is not a religion or a utopia or even a next frontier that is needed to inspire humanity to be better. I think it is a source of materials, energy, and yes, space for future populations to exploit, in ways that at least have the potential (in the very long run) to relieve pressure on Earth-bound ecosystems and societies. And for now at least, exploiting those resources will not displace or destroy anyone else as the Europeans did when they invaded the “New World.” I think the profit motive will play a key part in having a reason and the means to get more people in space, even if it’s not the only reason, with Elon Musk and SpaceX serving as Exhibit A for this approach. Having a long-run backup plan for humanity doesn’t seem crazy to me – as long as it isn’t coupled with the idea that we can just abandon this planet. Earth is really perfect for us, because we co-evolved with it. So as KSR and many others suggest, we have to make this planet work. That doesn’t preclude also using asteroids, the Moon, and other planets for their living space and resources. But we shouldn't expect them to be perfect societies or utopias. They will be imperfect, human creations, just like everything else humans have created (with the exception of Mozart's music).

But I also think that AI is going to have a very big part to play in space and in every aspect of life going forward, which may be bad news for old fashioned flesh-and-blood humans like us. If engineered “mind children” are the ones that reach the planets first... well, I don’t know what I think about it. For sure they won’t need life support, just energy sources. And maybe they won’t need meat machines like their parents to slow them down. I hope they still like us and remember to send us a postcard now and then.

Posted by FlyingSinger at 10:30 AM No comments: