Aurora: Generations Through the Void 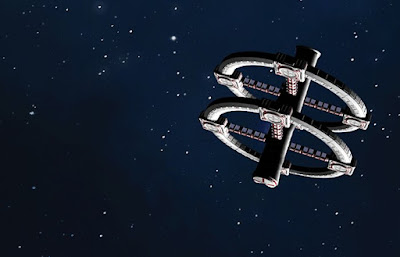 Aurora is Kim Stanley Robinson's (KSR) new book, a science-fiction novel set about 400 years in the future. I really enjoyed it. The "Accelerando" (singularity) has occurred, and Earth has sent out a number of generation ships traveling at sub-lightspeed (0.1c) toward nearby stars with planetary systems. The story takes place on the Aurora, which is about 160 years into its journey and is nearing Tau Ceti. They are in their deceleration phase, using a continuous series of small hydrogen bomb explosions to slow them down so they can enter orbit around an Earth-like moon orbiting a "small Neptune" planet in the star's habitable zone. The ship has two large, rotating rings which each contain a set of twelve, 4 km long "biomes" that simulate specific environments on the earth, complete with weather, plants, animals, and human towns. There are around 2,100 6th-generation humans on board, and they apparently have their share of technical and social problems.

The story is largely narrated by Ship, a quantum computer-powered AI that operates all the systems on the Aurora. The lead engineer is a woman named Devi, and her adolescent daughter Freya is the main protagonist in the early part of the book. They are sixth and seventh generation descendents of the humans who boarded the ship 160 years earlier. At this time, Freya is going off on her coming-of-age "Wanderjahr" which provides a nice device for visiting and describing various parts of this huge ship. As usual in KSR space societies (and life), there are conflicts and rebels and troublemakers -- it is certainly no Utopia. But it makes for a lot of good storytelling.

Aurora is incrediby detailed, but thought provoking and engaging as KSR's books tend to be for me. It connects in some ways to his 2312 world, where there were human settlements on Mercury, Mars, the moons of Saturn, and in hollowed-out asteroids, but in many ways it's an anti-space, pro-environment book, which is consistent with some of the things I read in a recent interview with KSR. Human beings are animals which have co-evolved with all the other life forms within Earth's environment. It's quite a trick to build a spaceship or a space settlement where humans can live for a while, and an even cooler trick to build one that can function as a closed environment for 170+ years. But in the end, this environment and the environment of some "earthlike" planet are just poor imitations of where humans are meant to be, the Earth.

I say "meant to be" not in some philosophical destiny sense, but purely in an evolutionary and environmental sense, as KSR depicts in this book. Aurora is huge for a spaceship, and equipped with multiple "biomes" modeled on various Earth environments. Everything the designers could think of is there to form a closed life-support system, but they couldn't think of everything -- for example, they did not fully account for variable rates of evolution between large mammals and bacteria. They experience some of problems of island evolution with small populations. The cleverness and persistence of people like Devi and of the ship's AI allow them to overcome many of the problems for many years, all the way to Tau Ceti, where they encounter other problems.

MINOR SPOILER: Not all of the inhabitants of Aurora decide to settle in the Tau Ceti system. The trip back to Earth for a subset of the settlers (the "backers") turns into a struggle and a nightmare for these descendants of the original crew. Those people wanted to go, to be the pioneers, or at least the ancestors of the true pioneers. But they didn't fully realize what they would be inflicting on their children and great-great-grandchildren on the long voyage. Perhaps that is true whenever humans migrate from one place to a new place, but at least all such moves to date have taken place here on Earth where the environment is largely compatible with our bodies.

Although I'm more optimistic than KSR that we can eventually solve many of these problems, I still think that evolution and other things could make such small-population multi-generation ships very inhospitable, at least for some of the people. Unless there turn out to be things like wormholes or other shortcuts through deep space time, I think it's unlikely that humans will ever be taking interstellar voyages, at least not in our original biological bodies. If there are to be centuries-long voyages, I suspect they will be made by post-human beings in non-biological or perhaps hybrid bodies.

Posted by FlyingSinger at 10:12 PM