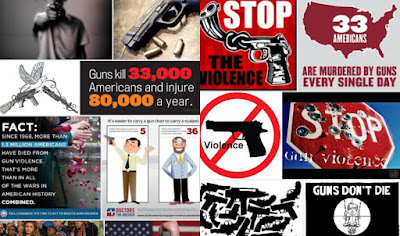 I've been thinking about gun violence. It's always in the news because with over 33,000 gun deaths per year in the USA, we're never more than a few days away from a major national gun death story. Just the other day, a disgruntled, fired ex-reporter from a TV station in Virginia killed two of his former colleagues while they were on the air doing a live news interview. He later killed himself. I can't find the number, but there were probably at least two dozen other gun murders in America on August 26. Something like 25 to 30 murders occur daily along with many other gun deaths, suicides and accidents, an average of about 90 gun deaths per day nationwide.

Considering that we are supposed to be an "advanced country," this is obviously appalling, but there doesn't seem to be anything we can do about it because of our history and politics. The paranoid gun lobby opposes even the most minor commonsense restrictions on gun availability. I feel lucky to live in the state with the second lowest number of gun deaths and nearly the lowest rate of gun ownership in the country. Only Hawaii is better than Massachusetts. These statistics are obviously closely related, but that is not obvious to the many people who feel that even the slightest restriction on the right to buy, own, and use guns is a violation of their civil rights. But what about the civil rights of the thousands of people who are killed or injured by these guns?

There are some countries in South America and Africa where there are more per capita deaths due to gun violence then in the USA. But we are the only country in the world with an advanced economy and high levels of education that suffers such high rates of gun violence. The US has 88.8 guns per 100 people, the highest in the world. This must reflect many people owning multiple guns, because the range for household gun ownership goes from 60.6% in Alaska down to 9.7% in Hawaii. Of course gun death rates correlate closely with these statistics. Hawaii has 2.6 gun deaths per 100,000 people (Massachusetts has 3.1, 2013 figures). At the top end, Alaska has 19.8 deaths per 100,000 people (the rest of the top five is Louisiana, Alabama, Mississippi, Wyoming).

As I said to my wife last night, this feels something like an uncontrollable natural disaster or plague for us, like a monsoon or an earthquake that hits every few days. Or maybe like living next to an active volcano. Other countries somehow manage to get better at this as they become more educated and more prosperous. But not God-Blessed-America! Here it is tied to the willful ignorance of a big chunk of largely "God-fearing" people, many of whom also deny evolution and climate change and refuse to vaccinate their children. Aided and abetted by certain Republican, corporate, and religious leaders.

I will end this cheerful survey with an observation from Nicholas Kristof of the NY Times who pointed out recently that more Americans have died from domestic gun violence between 1968 and the present than have died in all wars fought by the US, including the Civil War (estimated at 750,000 deaths, though disease probably accounts for more of those than guns). This was fact checked by politifact.com and seems to be true, with about 1.4 million killed in American wars, versus 1.5 million in American streets and homes. There's the case for American exceptionalism right there.
Posted by FlyingSinger at 9:19 PM

There are a few ways to dramatically reduce gun violence in America, IMO:

2. Sentences for a felony crime should be multiplied by the number of times a convict has been previously sentenced to prison for a crime or crimes. For instance, a criminal who has been sentenced to prison once before would receive another regular sentence, but if he, or she, has been previously sentence to prison twice before, they would have their jail time for their next sentence doubled (a more logical and fair multiple offender law, IMO)

3. Gun owners should have to pay $50 dollars for a Federal gun license plus $50 annually to renew that license.

5. There should be a 30 day Federal waiting period before a licensed individual can take home a new gun.


6. Gun owners should have to pay $50 if they lose their licensed weapon.

7. Gun owners should have to pay a $500 fee for every unlicensed weapon found in their possession.

8. Automatic weapons should be considered as-- weapons of mass destruction-- and should be banned from private ownership.

9. Persons found in possession of automatic weapons should be fined $1000 for each weapon found in their possession.

Thanks Marcel. It is absurd that cars and drugs and even toys are regulated for safety and in other ways but that guns have hardly any regulations. But it seems it would take a huge change in the political climate before even the mildest of such improved regulations could become law, except possibly in a few states or local areas, and probably not in the areas that suffer the most gun violence which tend to also be the most conservative. I'm not saying we shouldn't continue to try to improve things, but it's going to take a very long time. When things are so polarized that people can't even agree that saving lives is a common value, you know you're in for a long, frustrating struggle and that unfortunately many thousands of innocent people will lose their lives in the meantime. It certainly is very frustrating.