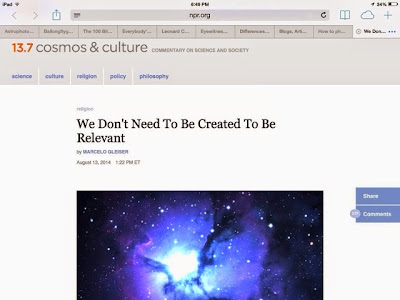 Discussions about the meaning of life or the reason for our existence both intrigue and infuriate me. This blessedly short NPR article is the latest thing I have read on this:
http://www.npr.org/blogs/13.7/2014/08/13/340073029/we-dont-need-to-be-created-to-be-relevant/

To me, we don't even need to be "relevant." Everything about this discussion was invented by humans, even the very ideas of meaning and relevance!

Science is the most effective system we have for making sense of the universe. As best science can determine so far, life started somehow, some 3.5 billion years ago, and evolution took it from there. This long process has produced many results, one of which is us, a form of life with powerful curiosity, able to examine its own mechanisms and origins and to define things like intelligence, purpose, love, and even "importance" that some of us who are not still fully occupied with survival may try to connect. There are plausible evolutionary explanations for the tendency to impose upon or find structure in things we observe, to seek connections and cause/effect chains. Our ancestors who were good at these things were more successful in finding food, avoiding predators, and reproducing than their less intelligent colleagues. And for all but the last 10,000 years or so, basic survival was all those skills were needed for (ok, there was art and some other things before that, but practically speaking, not much to show for that in the long period when the hand ax and the campfire were the peak technologies).

In my view, that is the end of the basic story. Our large brains evolved in response to survival challenges, but unlike the lion's sharp teeth or the cheetah's speed, our special evolutionary advantages were problem solving and flexibility, and these could be applied in many ways beyond hunting and gathering. A few breakthroughs in technology and culture launched us into civilization. A long and variable story in itself of course, but we could just as easily have spent another 100,000 years with the same basic stone hand ax. There was nothing pre-ordained about where we ended up and when. But here we are, a bunch of nearly hairless primates who like to dabble in philosophy and the occasional genocide or species eradication. Some more hairless than others, of course.

I understand how people can be dissatisfied with "somehow life started," but in spite of the overall success of science, it may not be able to answer every question we can ask. Maybe not now, maybe not ever for some questions. I don't think that means it's a failure, or that the unanswered questions must be "explained" supernaturally. It can just be, sorry, we don't know that yet. Put some funding into education and maybe someone will figure it out someday.

Maybe there is life elsewhere, even intelligent life. I'd like to think so, but even if they have existed far longer than we have, it's quite likely that there was no life whatsoever for the first 5 or 8 or more billion years of the universe. Big, expanding, unobserved, just doing its thing for no reason or lack of reason. Nothing to do with us or consciousness or meaning, except maybe in the fortuitous setting of physical constants that allow for stable nuclei, chemical bonds, etc. But even that is basically a circular argument. Who knows how many parallel or cyclic universes exist or existed with completely different and non-life-friendly physics? Maybe zillions. Maybe just this universe. A hole in one on the first try is certainly possible.

So basically, it is what it is! The universe didn't have to exist, but it does. No special reason for any of it, in my opinion. The same for us lucky humans. Lucky to exist, lucky to have a universe where physics and math work if we should ever be curious about that. And we also invented the idea of lucky, along with every other word and concept. But we didn't invent the universe. We just sprung up in it.

Posted by FlyingSinger at 9:56 PM No comments: