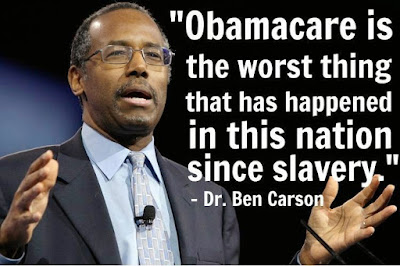 For the first time this year, Donald Trump is starting to fall behind in polls of likely Republican primary voters, especially in Iowa but also in one major national poll (New York Times today). This would be good news were it not for the fact that it is Dr. Ben Carson who is catching up with The Donald. Trump's conviction is that he is simply the greatest. He's self-serving and egomaniacal and willing to say or do anything to get attention. He is also extremely rich and quite smart in his obnoxious way. Sometimes I think he is playing all of us, that this is all a big game of some sort, although he probably really does think he could be a good president.

Carson, on the other hand, may be certifiably insane. Here's a guy who had to have been brilliant at one time to achieve what he did as an innovative pediatric neurosurgeon. But he's also a Seventh-day Adventist who seems to be completely dominated by his religious beliefs. It's almost funny that he has talked about his fear of a Muslim president who might try to institute sharia law in the United States. This from a guy who clearly wants to impose his own Christian beliefs on our entire country, starting with no abortions for any reason, although in a recent interview, he seemed unable to connect this with the obvious GOP agenda step of reversing Roe vs. Wade. It seemed like he didn't really know what that was. He has strong, insane convictions, but very large gaps in his knowledge of how our country works. And of reality in general. He looks and sounds like he's on Thorazine or some other antipsychotic drug.

It's a testament to the power of religion to make you believe in strange things that he does not believe in evolution. Here's a man trained as a neurosurgeon who helped develop a surgical procedure to separate conjoined twins joined at the brain. I have to believe that some of the procedures that were developed for this and other surgical innovations were tested and practiced on animals such as dogs, monkeys, and maybe even chimps because of their anatomical similarities to humans. He must have noticed those resemblances and is perhaps even familiar with how bacteria become resistant to antibiotics (through evolution). And that all life on Earth uses the same DNA system that we do, and that the genomes of great apes are nearly identical to ours. I suppose Ben believes that God created all of the similarities just because he felt like it, even though humans were somehow independently created from all the other animals.

Ben also believes that homosexuality is a choice (and not unlike bestiality), that Obamacare is like Hitler, that abortion is like slavery, that people who are shot by mass killers simply failed to defend themselves, and on and on. This Salon article is a nice review of seven of his most insane statements:
Considering that Carson claims to have been a Democrat in 1992, it's tempting to believe that his current conservative views have been cherry-picked to appeal to right wing Republican voters, although he might truly believe in some or all of them. In this Yahoo Politics article, he even describes how he only learned in 2013 the right way for a Republican to talk about guns. It seems he actually believes that assault weapons should be restricted in urban areas, but of course a Republican can't say anything like this, you always have to start with "the Second Amendment is sacred, no restrictions on guns!"

So what is this dude's appeal? He's personally non-threatening, soft-spoken, ultra religious, and occasionally articulate-sounding. I can see how this sells among evangelicals in a place like Iowa if you don't look too closely at his ideas and beliefs. But I would hope that once the details of his views become better known, that mainstream Republican voters will quickly recognize what an insane and dangerous thing we have here in Ben Carson. We should not be considering handing the keys to the US nuclear arsenal to such an inexperienced and loopy guy, let alone a man who believes that the "End of Times" may soon be upon us.