50th Anniversary of the Space Age 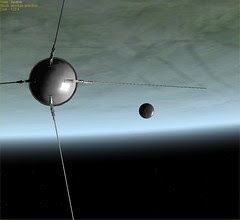 Sputnik 1 was launched into Earth orbit on October 4, 1957, marking the start of the Space Age. This week I received an announcement forwarded by the JPL Solar System Ambassador program about World Space Week, designated as October 4-10 annually. Since this is the 50th anniversary of the start of the Space Age, the World Space Week Association is encouraging educators, the news media, and individuals to give special attention to space exploration this year, especially during World Space Week. Sounds like a good idea, and their web site even has activity guides and other educational resources to help. The picture is an Orbiter screen shot of Sputnik 1 just separated from its final stage.
Posted by FlyingSinger at 4:58 PM