The Beatles have been one of my favorite bands since I first started listening to them in 1967 (yes, I was a few years late to the party - the first Beatles record I bought was the single "Hello Goodbye" b/w "I Am The Walrus" in December 1967). Recently I've been on a Beatles nostalgia kick, triggered by two books I've been reading, Can't Buy Me Love by Jonathan Gould and Revolution in the Head: The Beatles' Records and the Sixties by Ian MacDonald.

Of course I've read a lot of things about the Beatles over the years, but these books are especially enjoyable because they focus on the cultural context and on the songs. Gould's book is something of a cultural history of the 50's and 60's with fairly detailed descriptions of the Beatles' songs and albums as well as their musical influences. MacDonald's book (which I actually just got) is more of a detailed, critical song-by-song analysis, and while much of their music was amazing, this author's not afraid to point out that some of what the Beatles put out was actually pretty crappy (good example: Harrison's "Blue Jay Way," though I have to admit I listened to it a zillion times back in the day and still know it by heart - "Magical Mystery Tour" was the first Beatles album I bought - what did I know?). 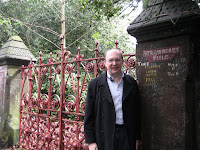 I've been reading Can't Buy Me Love on my iPod Touch (Kindle e-book), and it's really cool to be able to quickly pull up and listen to any song he's discussing since I have all the Beatles' songs on there. Ain't technology great sometimes? It was also cool that in the early part of the book, when Gould was writing about the boys' time in Liverpool, that I could think back to the "Magical Mystery (Bus) Tour" that I took there back in 2008. We even stopped in front of the church where John and Paul met in 1957.

That's me in front of the Strawberry Field gate.
Posted by FlyingSinger at 10:09 PM

Good Blog. Some of best loved Beatles tracks are on Mystery Tour.. but the album on the whole isn't as good as other albums.