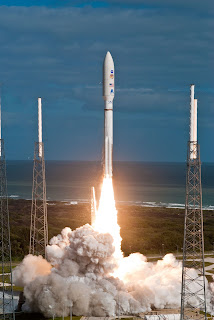 Lisa Hannigan's wonderful album "Passenger" includes a funny little song called "Safe Travels (Don't Die)." It sounds like it was inspired by a friend who says this to her when she travels, but here I am applying it to NASA's Mars Science Laboratory rover which was launched yesterday. I caught the launch live on CNN, and it was a beautiful sight. So far the spacecraft seems to be in good health, and I do wish Curiosity safe travels on its long 251 day cruise to Mars.

I was fortunate enough to see Curiosity in the flesh (so to speak) during assembly in the clean room at the JPL Open House I attended in May 2009. The picture above shows the "sky crane" rocket platform that will gently lower the rover to the surface in August 2012. More pix on Flickr.
Posted by FlyingSinger at 3:18 PM