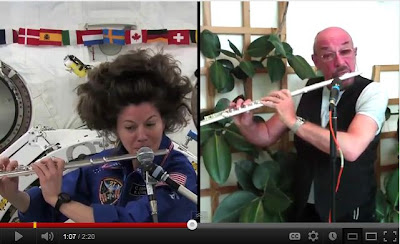 I really like Cady Coleman. She is one of the few astronauts I've had a chance to meet. She visited my space flight simulator demo booth at a Space Expo at the New England Air Museum a few years ago, and we spoke for a few minutes about educational outreach. She struck me as incredibly down-to-Earth (when she's not in space). I didn't realize at the time that she is also a musician.
Posted by FlyingSinger at 8:40 AM