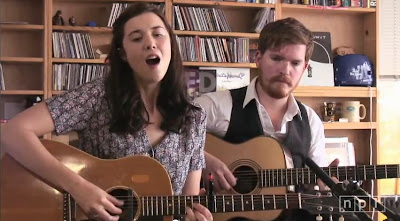 In addition to the "movie music" mentioned in my post about driving Europe, I've written a few other songs in the last few weeks, but nothing is quite ready to post. I need to get into my basement studio and finish some of these songs! It's too easy to start new songs and do partial demos on the iPad with GarageBand and all the various cool synths and other music apps now available. I shouldn't complain about too much inspiration, but the problem is not enough time and discipline to finish things. The good news is that thanks to these tools on the iPod Touch and iPad, I can write and record even when I travel, which was never very practical before.

I've also enjoyed music from other people, most notably the new John Mayer album "Born and Raised," which is great. Last week I saw cool concert in Boston, featuring Lisa Hannigan, an Irish singer-songwriter I've admired since I first heard her singing with Damien Rice some years back. Lisa was co-billed with an American singer-songwriter, Joe Henry. I was not familiar with his work and really didn't enjoy his part of the performance. But Lisa was wonderful. She performed most of her recent second album, "Passenger." I took a few videos, three of which are posted on YouTube: "Knots," "Little Bird," and "Passenger." The picture above is from Lisa's performance on NPR's Tiny Desk Concerts (pictured with her guitarist John Smith, who was also quite impressive at the Boston concert). We were in the fourth row at the Paradise, pretty nice seats but not quite as intimate as NPR's library.
Posted by FlyingSinger at 4:48 PM