Shaman: Inside the Paleolithic Mind 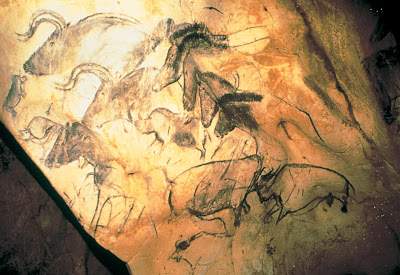 There were some amazing artists in France 30,000 years ago or so, judging by the incredible paintings discovered in 1994 on the rock walls of the famous Chauvet Caves. Culturally speaking, 30,000 years is a long time, but in biological evolutionary terms, it's a mere blink of the eye. The people who painted in those caves were genetically and probably mentally just like you and me. What would those ancient artists and their relatives and friends have been like? I suppose no one knows for sure, but thanks to "science fiction" author Kim Stanley Robinson, I feel like I have a few insights into what they and their environments may have been like. I even looked over the shoulder of one of them as he created the panel above, deciding what to draw, and how to depict the animals' motions and even emotional states. Until all the torches went out...

I just finished KSR's latest book, Shaman, and as with most of his books, I'm impressed by the many threads of human life that he manages to collect and connect in one book. I think of Robinson as more of an anthropological fiction writer than a typical SF writer. Whether he is writing about humans on Mars, Mercury, Europa, in Renaissance Italy, or in prehistoric France, the humanity of humans seems to be the main event. Of course this includes their intelligence and resourcefulness as well their emotions and every other aspect of personality. And lest we forget, their environment - whether it is Mars or Washington, DC, or prehistoric France, humans are affected by their environment and by technology, science, politics, and other things. When you're a world-builder like KSR, you want to build detailed and believable worlds, and he definitely is among the best in that department.

Although it is packed with amazing and real-feeling detail (no doubt the fruits of extensive research), Shaman is first and foremost a good story, the coming of age story of a boy named Loon, destined to be the next shaman of his tribe. At twelve years old, he is left in the wild with only his wits on a two-week "wander" that will establish him as an adult in his pack, and ideally teach him many things about himself. This is an exciting start to the book. Not all of it is as fast paced as this, though there are some chapters late in the book that are real page turners. There is also a lot of gritty detail when it comes to sex, hunting, food preparation, death, and many other aspects of daily life. Getting to know this world is essential to understand the people and their motivations, which are every bit as complex as those of people today.

I won't give away more, except to say that I read somewhere that it was meant by the author to take place in the area of Chauvet Cave in France. It seems clear that to some extent, KSR "reverse engineered" aspects of the story and characters from the Chauvet Cave paintings. I would suggest that if you read the book, that you have available a website (like this one) or book showing the paintings. In certain passages, you can follow along in great detail as the characters view or create sections of those walls. I plan to see Werner Herzog's film "Cave of Forgotten Dreams" as soon as I can to see and learn more about the Chauvet art. Shaman has really brought those ancient artists and their works to life for me.
Posted by FlyingSinger at 9:40 PM