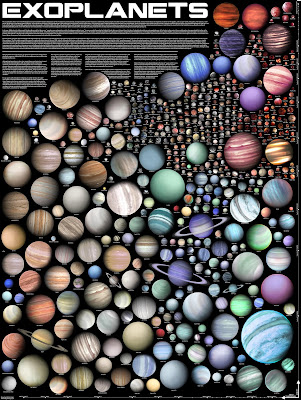 The picture here is by Slovak graphic designer Martin Vargic. It's a chart showing his artist's impressions of 500 of the some 2000 confirmed exoplanets arranged by mean temperature (x) vs. density (y). Although these planets have not been directly observed, the depictions are not completely  fictional, as they are based on temperature, density, metal content, and other factors (the rings are purely for looks -- they are pretty common in our solar system, but only prominent on Saturn).
Posted by FlyingSinger at 2:17 PM

More like, it's a great party and I was crashed into it!