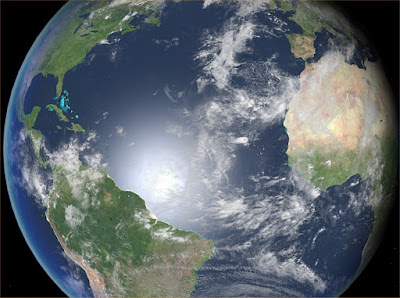 The image above has nothing to do with it except that this is the planet we all happen to share (a screen shot from the free Orbiter space flight simulator, and one of my most popular pictures on Flickr).
Posted by FlyingSinger at 12:18 PM

A measured and thoughtful piece. I've heard Pinker's theory many times over the years but never properly looked into it, I really must. There certainly seems to be a disconnect between the expense, laws passed and effort gone to to stop a few hundred people per year dying due to terrorism and the equivalent lengths gone to to save us from more mundane things, car accidents being a good example. If public safety were truly the motivating factor then much of what governments do would appear to make little sense.

Unknown said...
This comment has been removed by the author.
7:51 AM