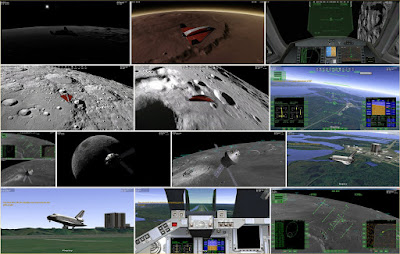 Orbiter 2016 is the latest version of a space flight simulator I have been playing with on and off since 2005. And while I'm now old enough to be a grandfather, I find that Orbiter still brings out the "space kid" in me. The sixties were a great time to be a space- and aviation-obsessed kid, and I was a NASA fan from Mercury to Gemini to the Apollo moon flights and beyond. Aside from TV coverage, my only space resources back then were books from the library, plastic model kits, LIFE Magazine, and a huge trove of "NASA Facts" and other free publications I would write to Washington to request. Fortunately NASA had a pretty big public relations budget in the sixties and they were happy to send bulging envelopes of space info to a kid in upstate New York.

I never really lost my fascination with space and aviation, as I have often discussed in this blog (though not so much recently). Thanks to personal computers and the internet, there are now more space and aviation resources than ever. I spent a lot of time in the nineties playing with various flight simulators, and I got my real pilot's license in 2001, though I ended up not flying nearly as much as I had hoped, and I am not an active pilot now. Orbiter was a great find in 2005, because it allowed me to combine my interest and experience with flight simulators with my long dormant goal of being an astronaut, albeit only a virtual one. And Orbiter was free (it still is).

Orbiter even inspired me to write a book called Go Play In Space (free Orbiter tutorial ebook), and to volunteer as a NASA/JPL Solar System Ambassador to do some space and astronomy-related educational outreach programs, often using Orbiter in my presentations as a dynamic extension of PowerPoint slides and words. The years 2005 to 2010 were probably my "golden age" for space related study, play, conferences, and educational outreach, but shortly after the release of Orbiter 2010, my company was acquired, and my professional workload greatly increased. Side interests like Orbiter largely fell by the wayside.

Things are still busy at work, but I do again find time to pursue hobbies like music and space, and with the recent release of Orbiter 2016, I'm getting fired up again. The biggest visible change in the 2016 version is built-in support for detailed 3D terrain on planetary surfaces, with gigabytes of data available for the Earth, Moon, Mars, and some smaller bodies. This doesn't matter much visually from a 300 km orbit, but when you are down low, it makes a huge difference, especially for the Moon and Mars. Earth terrain is nice too -- though not as detailed as in Microsoft Flight Simulator, it covers the entire globe (clouds are modeled too). Orbiter is primarily a space flight simulator, and although atmospheric flight is modeled reasonably well, if you are mainly interested in flying airplanes and understanding realistic flight operations, a dedicated flight sim like MSFS or X-Plane is probably a better bet.

Orbiter 2016 includes some other updates, and thanks to user interface improvements and a wide range of community-produced video and other tutorial materials, it is easier to learn and use than earlier versions, though the learning curve is still pretty steep.

I will be writing more about Orbiter 2016 in the coming weeks. In the meantime, here are some possibly helpful links, including a collection of Orbiter 2016 screen shots I have placed on my Flickr site.

My review of Orbiter 2016, Kerbal Space Program, and Space Simulator (iOS app) on The Space Review


Home page for the Orbiter Forum

TexFilms has many Orbiter videos including tutorials here

Posted by FlyingSinger at 1:25 PM

It should be doable to create an online launcher performance calculator using Orbiter or Kerbal analogous to Dr. John Shilling's calculator:

It should have a GUI where you could just plug in the specifications of your rocket and get a reasonably accurate estimate of the payload to orbit, without having to be familiar with Orbiter or Kerbal programming.