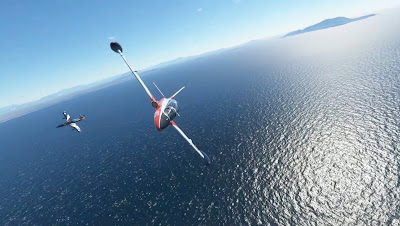 One of the cool things about Microsoft Flight Simulator is the ability to do multiplayer flights with other players over the internet. I have done quite a few of these, most often group flights where we explore some interesting part of the world while we talk about flying or other things, over Discord or Skype. I've also done flights with my Australian friend Pete (a.k.a. "MiGMan"), often testing out routes in his ongoing MiGMan's World Tour (MMWT) Series. This is an enjoyable social aspect of flight simulation, where airplane nerds can talk with other airplane nerds about airplanes as they pretend to fly them!

The other day we did some flying on a MMWT flight plan out of Naples, Italy, visiting Mount Vesuvius, the Amalfi Coast, and the lovely island of Capri. Pete captured and posted some pretty cool videos from those flights. Appropriately enough, we were both flying an Italian jet trainer, the Aermacchi MB-339 by IndiaFoxTecho, which is quite a sweet little airplane. One of things we work on is formation flight. This is something of a brain challenge since there are many things to keep "happy" if you want to fly two planes close together at 250+ knots. Military pilots do it all the time, but it's harder than it looks, even with VR or head-tracking hardware to simplify looking around. We don't always fly tight but we have some fun moments. 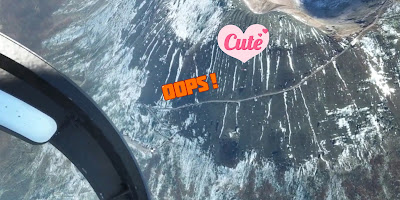 Of course things do go wrong at times, as when I pulled too hard, stalled and "landed" on Mount Vesuvius. It's a simulator so no harm done.

We also did some simulated ACM ("air combat maneuvers, a.k.a. "dogfighting") over and around the island of Ischia which was really fun. In VR, I can actually look all around and up simply by moving my head, and I try to keep the other plane in sight while maneuvering. As the "host," Pete was setting up the time of day and weather for both of us, but for some reason, mine was considerably more cloudy than his, and when we got above 5000 feet, I could lose him in the clouds. It looked so much like realistic semi-hazy VFR conditions that I didn’t mind.

There are no weapons in Microsoft Flight Simulator, but you can pretend, as real pilots do in training. I even got to say cool fighter pilot stuff like “fight’s on,” “guns, guns, guns” and “knock it off.” The audio from the MB339 includes the sounds of your virtual pilot breathing hard and grunting to resist the effects of pulling 3 to 5 G’s, while I stayed at a comfortable 1G the whole time (I could have turned on the blackout simulation to force myself to limit the G more realistically).

Is all of this a waste of the beauty of coastal Italy? No, you can still enjoy the Mediterranean and all the beautiful beaches, towns, mountains, and volcanoes. You just have to try to not crash into them.
Posted by FlyingSinger at 4:10 PM

Thanks for sharing your fun! - C