I was listening to a favorite symphony this morning, Mendelssohn’s Fourth, the Italian Symphony. The first movement is as sunny as I’ve ever known it to be in Italy, even in Tuscany. I started wondering about all the little details that make it sound that way, and I decided to have a look.

Recently I have rediscovered a free music notation software called MuseScore. Version 4 was released late last year, a major upgrade in many ways, especially the orchestral sounds that are bundled with it. It can render audio from a score with astounding realism, though there are occasional glitches and instruments that don’t sound so perfect. Of course it will improve -- and it’s already amazing. The quality of the “engraving” (the way music is presented on the page) has also greatly improved, sometimes to the point of beautiful (see example taken from a PDF below). And did I mention it’s free? 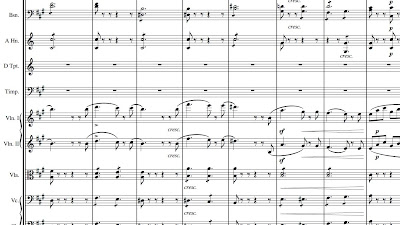 I wondered if any of the many users on MuseScore.com might have entered and shared the score for the Italian Symphony. Someone did, at least for the mostly sunny first movement, and they did an excellent job. I downloaded it to my PC and listened with headphones as the score scrolled in time with the music. Still beautiful and even more amazing to watch as the notes and dynamic markings turn into music. 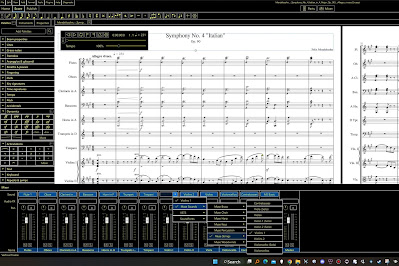 I listened again, this time selecting individual instruments or combinations to see how the pizzicato on the celli played against the fast tremolo on the second violin and viola, and how high melodic fragments in the woodwinds brightened the sound with splashes of color.

Hearing the parts in isolation, it was clear where Mendelssohn had left holes to be filled by other instruments. And how he had used the dynamics from p (soft) to fff (very loud) to vary the texture and and create contrast.

Texture, splashes of color, contrast -- these sound like visual references, and for some reason I thought of Monet’s Water Lilies series. I’ve been lucky to see a number of those amazing works in the US and in Europe over the years, most recently at the Kunsthaus Museum in Zurich in 2016. A room there displays three of the gigantic paintings. 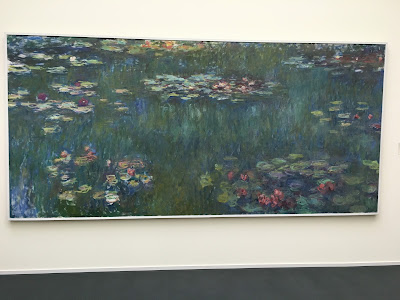 I’m not a painter, but whenever I see any great painting, I will get close and marvel at how very small or even tiny applications of paint have combined to create the overall look of the painting, in whatever level of detail the artist chose to depict. 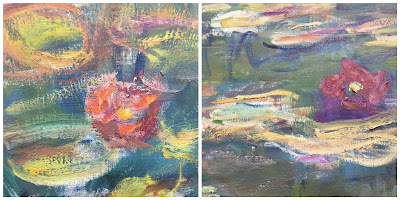 Artists clearly must learn to keep “the big picture” in mind as they work on the small details, but in the case of the Water Lilies, the big picture is really big. The Water Lilies I saw in Zurich are 6 meters in width and 2 meters tall. I visited Monet’s home in Giverny many years ago, and I have seen photos of the artist working on these gigantic canvases in his large studio, so I have some sense of the environment in which he worked. Clearly, he could only see a small part of the canvas as he worked on it. This “artistic scaling” of thousands of brushstrokes into a huge, coherent, and beautiful painting still seems like magic to me. 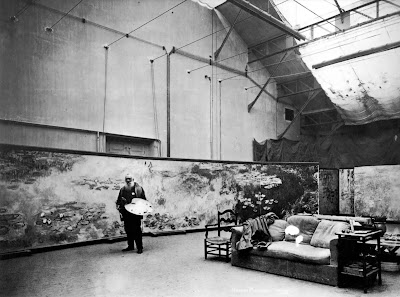 I feel much the same about the way Mendelssohn and other composers can conceptualize a large, complex piece like a symphony and then construct it from thousands of notes and other musical elements. Until recently, this could only be done by writing the score on paper and having musicians play it. A piano might serve as an aid in trying out harmonies and rhythms, but the only way to “hear” the interactions of multiple instruments would be to “play it” in your head from the written score. This is a skill that experienced musicians may develop, but not me, unfortunately. Luckily for my composing efforts, there are now tools like orchestral sample libraries, recording software like Studio One, and of course notation programs like MuseScore 4 that will allow me to hear a score at any point in its development without needing this skill. 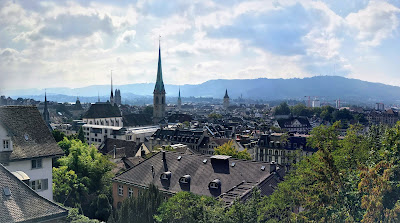 It’s always fun to find connections among my various interests, and to be reminded of a wonderful place like Zurich. Hard to believe that was almost seven years ago. I’d love to go back. I’m also happy that MuseScore 4 has come along to help me explore some of favorite music in more detail, and to even create some of my own.

Posted by FlyingSinger at 11:29 AM