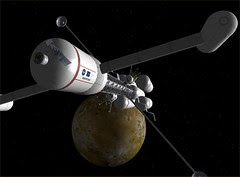 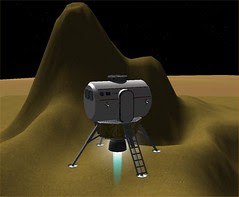 I've been looking at Orbiter interplanetary add-on ships that carry landing craft. There are a few of them around, and I want to recommend one for a follow-up activity for the Earth-Mars chapter in the new edition of Go Play In Space. In that chapter, the standard Delta Glider is used, which makes things easy because it's a futuristic (though still physically realistic) spaceplane that has the range and power to get to Mars, as well as hover engines to make it (relatively) easy to land. It doesn't really matter in a simulator, but the fact that the Delta Glider has about the same interior space as a minivan hurts the realism just a bit for a six month flight.

Near-future Mars spacecraft such as Mars Direct and Mars for Less are in the pipeline for Orbiter, but for now, I thought I'd look a few more years ahead, to the late part of the century. There are some add-on ships around that implement exotic but possible propulsion systems, provide large crew spaces (often rotated for artificial G), and can carry one or more smaller craft (such as the Delta Glider) for surface operations.

I had been planning to recommend the Vespucci D (Nectioch, John McCain, and "Oz") which is a large spacecraft with rather exotic propulsion. This is a cool ship that can carry up to four Delta Gliders, but there is a bit of a procedural learning curve for using its power and propulsion systems. So I kept looking.

Today I tried out Deepstar 1.0, a rather nice recent add-on by Alain Hosking (80mileshigh), and this could be the answer. It's also a rather large ship with rotating hab compartments, and it carries two lunar module-like landing craft. These have hover engines, so the LandMFD autopilot can land them, at least on moons with minimal atmosphere such as Io (shown above). It seems to work quite well in local tests, and I see no reason it won't work well with IMFD (Alain supplies a large number of scenarios with tips for using TransX, perhaps the most commonly used interplanetary flight planning tool).

The only downside to the Deepstar (cool name) is that I'm not sure the LM-like landers are really suitable for Mars entry. They may work anyway (Orbiter doesn't really keep track of aero-heating, so you won't burn up), or maybe I can try substituting Delta Gliders for the standard landers. This could cause rotational stability problems though.

The quest continues... more pix on Flickr.
Posted by FlyingSinger at 12:42 PM