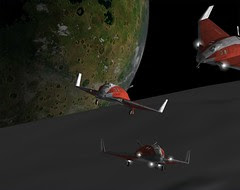 Swift and Voltaire are the two largest craters on Deimos, the potato-shaped outer moon of Mars (its mean diameter is only about 13 km). Saxifrage Russell is one of the "first hundred" settlers on Mars in Kim Stanley Robinson's Mars Trilogy. More about the connection after a little background...

After starting it and getting interrupted some months ago, I just finished reading the second book in the trilogy, Green Mars, on my long flights to and from Taiwan. It's a powerful epic of terraforming, politics, social science, war & peace, geology, engineering, life extension, culture, psychology, biology, and just about anything else involving human beings. It's simply amazing that Robinson could have created a future world that is so richly imagined, so tangible and so detailed. Wonderful stuff.

Without giving away too much of the plot, I can say that in the period of this book (from the late twenty-first century until around the 2120's), Mars has been extensively terraformed, and it already supports a large human population. There is conflict set against the backdrop of powerful "metanational" companies who control much of crisis-gripped Earth, and who wish to hold on to Mars as well. Meanwhile a variety of factions on Mars struggle with this and with many other problems, and a movement for Mars independence grows.

Sax Russell is an amazingly brilliant and versatile scientist, the head of the initial terraforming actions in Red Mars (starting in 2026), and a dominant character with several roles in Green Mars. Late in the book, he is working hard to prepare defenses against the metanationals in the likely event of armed conflict. One thing he decides to do is to eliminate Deimos as a potential space weapons platform (a role served by Phobos in the first book, to disastrous end). In part 8 of Green Mars, Sax and his people land on Deimos in a number of space planes. They install robotic equipment that will construct the infrastructure needed to relocate Deimos to a safe distance. A pretty wild plan (read the book for more).

The picture above is from a scenario I set up in Orbiter to illustrate this scene from the book. I reinstalled the Green Mars planetary textures (by "Schimz," available at avsim.com) and placed a few Delta Glider space planes on close approach to Deimos. In the scene in the book, Sax lands near Swift Crater, and the experience of walking on the surface under extremely light gravity (about 0.04% of Earth G) is described. This is a tiny but fascinating episode in the epic of Green Mars.

N.B. KSR points out that the craters are called Swift and Voltaire because both men predicted that Mars would have moons, a century before any were observed. Swift even predicted that there would be two Martian moons, apparently based on a supposed sequence. Venus has no moons, Earth has one, and Jupiter four (as known at the time). The sequence 0, 1, 2, 4 has a certain appeal, so Mars was assumed to have two moons.
Posted by FlyingSinger at 1:50 PM

All right all right. You're about the eleventy-hundreth person to say the Mars trilogy is a good, great, fascinating read.

I tried - lord how I tried - years ago to read Red Mars. Couldn't get through it. Perhaps it was just the place I was at. You've convinced me to try it again by gum.

Hi Brian,
The Mars Trilogy (2 of 3 so far for me) is great, but KSR is not an action writer by any means. There were parts of Red Mars and Green Mars that seemed too slow, too detailed, with too much geology descriptions and too many seemingly familiar conversations. And Green Mars took me maybe 100 pages to get into. But the overall effect is that I now feel I have visited that world and experienced what it would be like to settle a new world (real life is often slow and detailed too!). It's worth perservering IMO. Next for me is Blue Mars about which I have heard quite mixed reactions. But I'll give it a shot...

There's also a "happy ending" shift for a major character that is unconvincing.

Mars Trilogy is simply great, best hard science-fiction ever. Some parts seem like written specially for engineers, and as one, enjoyed them the most. But not only that, the psychological evolution of characters is so elegant, the world created so deep, that as said, it's almost like having been there. I keep reading the 3 of them every year.