Now is a good time to explore 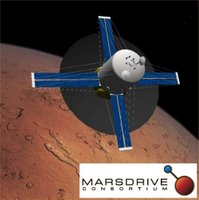 The headline comes from an impeccable source: a fortune cookie. Fortune cookies are an excellent source of random phrases that mean pretty much whatever you think they mean. But this one is right. Here’s another one.

One day, I don't know when, but one day, there will be more humans living off the Earth than on it.

That’s not a fortune cookie, that’s NASA Administrator Mike Griffin quoted in Rolling Stone (February 23, 2006). That article was pretty much mocking the whole humans in space endeavor, but I think he’s right too. And how about this:

It’s really incumbent on us as life’s agents to extend life to another planet. I think that being a multi-planet species will significantly increase the richness and scope of the human experience.

That sounds like Kim Stanley Robinson’s character Hiroko in Green Mars (though too wordy and not quite mystical enough for her). But it’s actually Elon Musk, founder and president of SpaceX (in an interview in the summer 2006 issue of Ad Astra). It’s tough work building completely new launch vehicles and spacecraft that will eventually lower the cost of access to space, but Elon and his team are working on it.

And I’m working on it too, in a much smaller way. Writing Go Play In Space to help people learn to use Orbiter was a start – Orbiter is an immersive simulation of many aspects of spaceflight, allowing a “hands on” approach otherwise unavailable to anyone outside NASA or ESA. I think Orbiter can really help to build interest in spaceflight. This week I was pleased to accept the position of Educational Outreach Director for the MarsDrive Consortium (MDC). I had been working with Grant Bonin, who previously held this position along with “Missions Planning Director,” a bit too much for one person.

The basic educational outreach task is “education of the public on the merits of unmanned and manned space exploration with an emphasis on Mars,” and this needs to be focused and turned into actions and materials, which I will be working on over the next few months. If you have an interest in scientific and technical education with an emphasis on space, please consider joining MDC and contributing your efforts to this or to one of MDC’s other task forces. There’s more than one way to get to Mars, and now is a good time to explore.
Posted by FlyingSinger at 10:29 PM