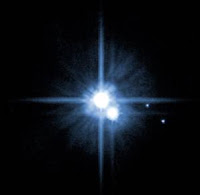 I have to say that I have not been one of those who has been especially worked up about Pluto's 2006 "demotion" from full-fledged planethood under the IAU's revised definition of a "planet:"

A celestial body that (a) is in orbit around the Sun, (b) has sufficient mass for its self-gravity to overcome rigid body forces so that it assumes a hydrostatic equilibrium (nearly round) shape, and (c) has cleared the neighborhood around its orbit.

I understand there are issues behind this definition, including the likelihood that Pluto is only one of many Kuiper Belt objects of similar size, and that it's small compared to any of the other "traditional" planets. I don't really care whether it's called a planet or a dwarf planet - definitions are only supposed to help us understand things, they don't really change the nature of the things themselves. The map is not the territory. Et cetera.

But astronomer and author David Grinspoon wrote a short essay in the March issue of Sky & Telescope called "This Is Not a Planet?" (not online yet, but he expands upon the essay in this S&T podcast). He points out that the IAU definition was a rather ad hoc and rushed compromise, and that it's rather weird that something called a "dwarf planet" is not also a "planet." Mercury, Venus, Earth, and Mars are Terrestrial Planets, but also planets. Logically, it would seem that "dwarf planet" is more of a sub-category than a main category.

So in the spirit of inclusiveness toward planet-like objects throughout our solar system (not to mention "exoplanets" in other solar systems), I'm casting my vote for "a dwarf planet is a type of planet, Pluto is a dwarf planet, therefore, Pluto is a planet." As long as they orbit a star and have a roughly spherical shape, I say let 'em in! Of course I don't actually get a vote, but that's how I would vote if I did get a vote.

And oh yeah, welcome to the family, Ceres!
Posted by FlyingSinger at 10:22 PM

Actually, you DO get a vote. Everyone gets a vote. This will ultimately be decided by both professional and popular usage, and the IAU does not necessarily get the last word - especially if it continues to hold to such a sloppy, ill-conceived definition...

I second Dr. Grinspoon's comment: You do get a vote, as does everyone. The IAU is not some sort of priesthood that can issue decrees from on high even when those decrees make no sense. If the IAU persists in this path, it will make itself irrelevant. You can find out more about the other side of this issue by visiting my Pluto blog at http://laurele.livejournal.com

Sorry for having to remove the previous comment; it was only because of a typo.

As I've been telling people for months now, a dwarf star is still a star, so logically a dwarf planet must still be a planet.

By the by, don't forget Eris!

I've been telling people for months now, a dwarf star is still a star, so logically a dwarf planet must still be a planet.