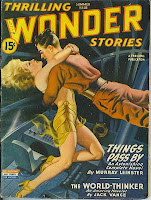 OK, that's a corny title for a blog post or a piece of music. But it's better than the working title I had for this little ambient creation (I first called it "Mystery Chord Chowder").

This piece uses a number of voices from Sonik Synth 2 rising and falling through a chord progression that flows through several keys in hopes of suggesting free fall (or something). It's spacey anyway, so I'll probably use it in my April astronomy podcast.

The illustration is from the Summer 1945 issue of the SF pulp magazine Thrilling Wonder Stories. The idea of love in zero G apparently occurred to people quite early in the space age. Germany's V-2 rockets must have just barely stopped raining down on London when this issue went to press.
Posted by FlyingSinger at 10:15 PM