I bought a really great space documentary from 2004, Rocket Science. This three DVD set is "out of print" but you can still find some used and new copies from third party sellers through Amazon and other sources. It covers the early X-plane flights, the history of rocketry, the Mercury and Gemini programs, and the full Apollo moon program in substantial detail. So far I've only watched a few segments of the 9+ hours of video, but it's really great, with intelligent narration and extensive interviews with many of the astronauts and others (e.g., Chuck Yeager). Good stuff. 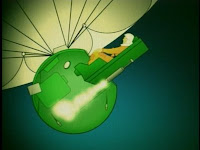 I learned one thing I hadn't known about Yuri Gagarin's historic first orbital flight. The Soviets had not quite worked out the soft-landing system for the Vostok spacecraft, so they installed an ejection seat, and once he reached a safe altitude under the capsule's parachute, Gagarin manually ejected and landed on his own (as shown in this frame from the video - there are a number of explanatory animations like this in the video) .

Update: Not "out of print" after all, apparently still available from Apogee Space Books. Thanks for the tip, Eric.
Posted by FlyingSinger at 10:37 PM

I thought that cover art looked familiar. I'd seen it before on the Apogee space books website. If you've never been there, you should check it out. There are lots of niche books about the history of spaceflight. Most of the books come with either a DVD or a CD-ROM. The web-site for the Rocket Science DVD set is here: