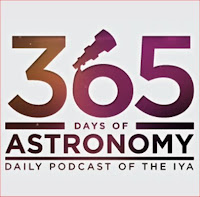 I've mentioned the 365 Days of Astronomy podcasts a couple of times, including the fact that I'll be doing the one on April 14. But what I may not have mentioned is that these podcasts are really quite good, and in many cases, of interest even to people who don't think of themselves as astronomy fans. A few notable examples: January 3 (Five Years of Spirit on Mars), January 6 (Top 10 Reasons Stargazing is Cool), and January 10 (a vivid description of Galileo's 1610 discovery of the moons of Jupiter).

So if you aren't listening, you should, and if you know people with even the slightest curiosity about nature, encourage them to listen too. You can listen (or read) directly on the web site, or listen or subscribe through iTunes (for free). And if you're an astronomy or space hobbyist or blogger, or even just a casual stargazer who saw something cool in the sky, consider contributing a podcast yourself. There are probably still some openings for later in the year.
Posted by FlyingSinger at 5:20 PM

Thank you for the reference to my podcast (January 6); you are correct -- these are stacking up to be some really good podcasts! We like the project so much we sent some sponsorship money to help keep it going!