The Future of Human Spaceflight 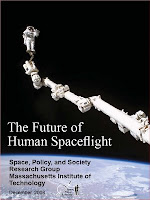 In December, a report called "The Future of Human Spaceflight" was issued by MIT's Space, Policy, and Society Research Group. I just read the report, and I have to say that it makes a lot of sense. Most fundamentally, it recommends a more careful evaluation of the objectives and risks of human spaceflight, suggesting that "primary objectives" of exploration, national pride, and international leadership are worthy of significant risk to human life. As the report says,

Human spaceflight achieves its goals and appeals to the broadest number of people when it represents an expansion of human experience.

Think Apollo astronauts walking on the moon - definitely a new realm of human experience. Science, economic development, technology spin-offs, and education are "secondary objectives" - potentially valuable but not necessarily worth the costs and risks of direct human involvement. I guess I agree with this, though I think it's somewhat short-sighted in terms of economic development and educational inspiration.

Apollo was very much about "primary objectives" (especially national pride and international leadership in the Cold War). But the "secondary objectives" paid off handsomely for the US in development of high tech industry and in the inspiration of baby boom kids like me who went on to become the engineers and scientists who drove the technological and economic development of the US in the 1970's and beyond. Could the US have achieved those results by directly investing in Earth-focused technology and education? Possibly, but it was really the fact that there were human astronauts that got me intensely interested in science and technology (after first wanting to be an astronaut).

In any case, they definitely see a continuing role for human spaceflight, but they suggest that we be more clear on why we're doing it. In practical terms, they recommend completing the ISS, retiring the shuttle on schedule, keeping the ISS operational as an international laboratory until 2020 (current plans end at 2016), and clarifying the moon/Mars strategy that was defined (rather vaguely on Mars) in the 2004 Vision for Space Exploration. They briefly mention expanded use of commercial space flight services and they also discuss ideas for increased international cooperation on space, including China and India. I think this report is a useful document for people interested in human spaceflight and the future of NASA, whether you're a space fanatic like me, or the president-elect of the United States.
Posted by FlyingSinger at 5:33 PM

I pretty much disagree with 'The Future of Human Spaceflight' report. Wasting 10 to 20 billion dollars a year of the tax payers money in space for 'pure exploration and pride' for an elite few astronauts is just wasteful and silly, IMO.

NASA's priorities, IMO, should be:

1. Creating a safe and reusable extraterrestrial infrastructure for a permanent and continuously growing human presence on the Moon, Mars,and in orbit (in simulated gravity environments).

2. The exploitation of the natural resources of the moons of Mars and the asteroids.

3. The defense of the Earth from dangerous extraterrestrial objects (meteors, asteroids, and comets).

4. And then, finally, to explore and to build large extraterrestrially manufactured space telescopes on the Moon and in space.

I want to see those things too, but they are really long term goals that should ultimately be the domain of commercial companies, not the US Government. True, an asteroid could hit any time, and over thousands of years, we will certainly be hit sometime. We should prepare better for this. But the odds are small in any given year. Research to collect continuously updated and better data on near-Earth objects needs to be done, and some is being done with instruments like Pan-STARRS now under construction.

I think this report is realistic about what average citizens appreciate and want from space, and it is not for NASA to be in charge of space colonization, space mining, and space manufacturing. Government agencies don't do those things on Earth (at least in the US) and I don't expect they will do them very well in space. They will all come in time as commercial developments. I think NASA should do the exploration, the research, and the preliminary infrastructure development (like ISS and early moon bases) that will pave the way for these other developments, and also expand the ability to work cooperatively with other countries' space activities through more joint projects and standardization on things like structural interfaces and life support systems so everyone's space systems will work together.

NASA should also experiment with things like artificial gravity (spinning tethered spacecraft etc.) which will be needed for long duration missions. More exploration of asteroids would help prepare for future exploitation of their resources (this goes for the moon too). Expanded support for independent commercial development like the COTS program would be good too. All those big future plans will need more than one source of space transportation - just as we have more than one airline in the world.

Basically they said we should be more realistic about what we want to do, what we should do, and what we can do. I'm impatient too but NASA will probably continue to get about 1% of the federal budget and can only do so much with that. This report suggests that we be honest with ourselves about what that "so much" can and should be.

Realistically speaking, NASA cannot afford to support a significant amount of human exploration on their current budget. I hope that the new administration will be able to rectify the disparity between the goals mandated to NASA, and the funds allocated to accomplish these goals.

For the near term, though, I think NASA should consider devoting more resources towards research and development of the technologies which are going to be required for future human spaceflight: closed-loop life support, advanced power and propulsion, ISRU, human physiology in the space environment, etc. Once these technologies have been sufficiently advanced, they can be transferred to the private sector for commercialization.

At the same time, NASA should also clearly identify the things they want to accomplish in space with humans, and then make a firm commitment to acquire commercial spaceflight capabilities from the private sector.

NASA has had some great successes in their human spaceflight program, but the current paradigm of government systems launching government astronauts is inherently self-limiting. At current funding levels and with their present and planned launch vehicles, they will never be able to support more than a handful of manned missions each year.

By doing the lion-share of the R&D and technological risk retirement, as well as making clear commitments to specific exploration goals, NASA may be able to encourage private sector innovation while avoiding cost-plus contracts and other inefficient procurement processes. Perhaps the recent deals with SpaceX and Orbital, under the COTS and ISS resupply programs, will serve as a powerful demonstration that not only are such alternative procurement options possible, but they are also far more effective at meeting NASA's spaceflight needs for the future.

We've had manned space flights for nearly 50 years. So where has private industry been for half a century? Maybe they need another 50 years to figure out how to make a quick profit:-)

If we had waited for private industry to put the first satellite into orbit, I think we'd still be waiting! There would be no private satellite industry or any CNN or HBO or huge baseball and football player contracts without government (tax payer) investment in space technology.

Once the government funds the building of permanent transportation infrastructures, private enterprise usually follows those roads.

Once the Ares V is fully operational, we need to immediately deploy a permanently manned facility on the Moon. That shouldn't take more than two or three launches.

But there's no logical reason for another Apollo type round of exploration (as proposed by NASA's Constellation program) exposing astronauts to unnecessary amounts of deleterious cosmic radiation. The lunar base could be assembled by remote control from Earth and should be ready and properly shielded with Moon dirt once the astronauts arrive for a stay of several months or several years.