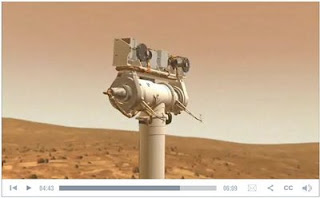 As you probably know, this month marks the five year anniversary of the Mars Rovers Spirit and Opportunity landing on Mars. Famously "warrantied" for just 90 days, both rovers are still roving Mars five years later, though in recent days, Spirit seems to be having a few problems. It has not been responding normally to some commands.

But thanks to a robust design and a very clever and dedicated team of operations people at JPL, Spirit has managed to overcome other serious problems in the last five years, so don't write her off just yet! I just watched two recent JPL videos looking back on the amazing "careers" of these two plucky robots. The rover drivers and and other team members sound like proud parents describing the accomplishments of their children. There's no embed option for these 6 minute videos, but Spirit is here, and Opportunity is here. There's also a 4 minute video "Five Years On Mars" - it's funny (and real) when they ask Steve Squyres how he feels about the five years, and he says, "Exhausted - I mean really exhausted!" But it's clear that he is also a proud and happy father.
Posted by FlyingSinger at 8:47 AM