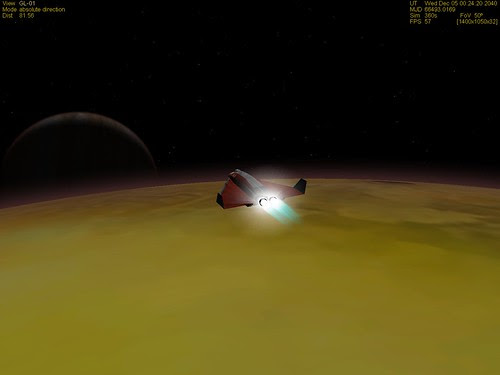 I signed up to do a podcast for 365 Days of Astronomy, and my "broadcast" date will be April 14. My topic will be "Exploring Space With Your Computer," so I need to figure out how to turn this very visual topic into an 8 minute audio-only talk (of course most topics in astronomy are visual, so I'm not alone with this problem). Naturally I will talk about Stellarium and Orbiter (among other things), and I plan to use some sounds from Orbiter to "illustrate" my talk as I tool around the solar system in some of my favorite Orbiter spacecraft. I will probably open the talk from a spacecraft orbiting Io since I always enjoy watching Jupiter rise.

I also plan to include some background music, and I thought that some spacey, Eno-like, new agey music would be nice to set the mood - the kind of thing you often hear in planetarium shows. So I'm working on writing and recording some music for my podcast. This isn't my usual style of songwriting but I have some ideas and a good bag of audio tricks on my computer, and I can mix it all up nicely with Sonar.

So far I'm collecting sounds and some additional tools and creating some test pieces. One of these new tools is a weird little program called Sounder. It has a very Windows 3.1 look and feel (latest version seems to be from 1997), and it has a very odd approach to the musical interface. Little icons bounce around in windows, sounding a musical note on each bounce. You can pick the instruments from all the MIDI sounds available in your sound card or keyboards, and you can choose various other things like the note palette, the window sizes, the number of objects, their x and y speeds, etc. It's pretty easy to get something that sounds cool, and if you play around with the controls, you can shape the sound in various ways.

So far I've just recorded some of these things into Sonar as audio, though I read that there is a way to use some MIDI tools to capture Sounder's MIDI stream into sequencer software (which Sonar also is), which would give more control including the ability to edit note sequences and assign the sounds to various soft synths (of which there are about a million you can download, not to mention "sound fonts" of various sampled instruments). I've also recorded some samples from music tools on the iPod Touch, such as Pocket Guitar and Bloom.

This is really great fun and it's a nice "mission" that should help me to get back into writing and recording music, which is one of my goals this year. Of course I still have to remember to write and record the podcast itself. It's due by March 14
Posted by FlyingSinger at 1:37 PM

Will be nice to hear you:)

Hi there. Just discovered and been enjoying perusing your blog this evening. Nice blend of topics! Seeing that you're such a space fan as well as a musician yourself, I thought you might get a kick out of the CD we just released a few months back. It's a tribute to the Columbia shuttle, and was composed and performed by my wife, and recorded by her trusty engineer (me). You will find the details at our site chubbycrow.com. Hope you enjoy reading about it if you feel so inclined. Best wishes!