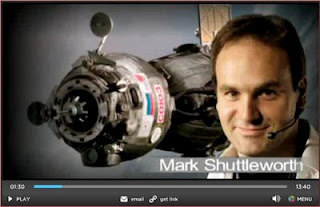 I was intensely focused on the periscope, and after we docked, I looked out my window and suddenly the radiators and solar panels show up. There's this bloody great structure there, and it's very dramatic. You dock with the sun behind you, so it's very, very stark, and everything around it is completely black. It's very stunning, very space, and very cool.
-Mark Shuttleworth

Technology Review has a great feature this week, "an oral history of the launch of space tourism." Over a period of six months, they interviewed five of the six private citizens who have taken flights to the ISS on Russian Soyuz spacecraft (Mark Shuttleworth, Greg Olsen, Anousheh Ansari, Charles Simyoni, and Richard Garriott). They were interviewed separately, but the article interweaves their individual comments about the phases of their Soyuz/ISS missions. It's interesting to read their differing reactions to their nominally similar experiences, to see what was important and notable to each of them, what they thought was great and what they complained about. Charles Simyoni seemed to complain the least. He liked it so much, he's going back this spring (he exercised a $5 million option for a return ticket).

Several thought that the hardest part was learning Russian! That wouldn't bother me - I studied Russian for four semesters in college and I'm sure I could get it back without much trouble, especially if it were part of preparing for a spaceflight! I'd sign up to go in a minute, but I don't think it's something I can put on my American Express.

There's also a video with excerpts of the interviews here.
Posted by FlyingSinger at 9:59 PM