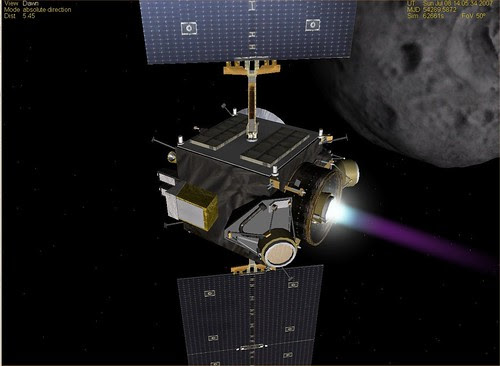 There's a good article in the February 2009 issue of Scientific American on electric (or plasma) propulsion systems. It explains the basic principles and the differences between ion drives, Hall thrusters, and magnetoplasmadynamic thrusters (MPDT to their friends). The article does a good job explaining the limitations of each technology and what researchers and engineers are doing to overcome them to improve thrust, efficiency, and long term reliability. These highly efficient propulsion systems will hold the key to faster access to the outer parts of the solar system - an ion drive is already in use on NASA's Dawn mission to the asteroids Vesta and Ceres. The picture above is an Orbiter screen shot I took on a simulated Dawn visit to Ceres. 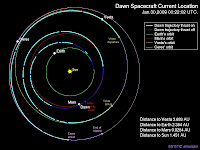 If you'd like to try an ion drive yourself, you can download Brian Jones' Dawn v.2 add-on for Orbiter and play around with the included scenarios. Also recommended is Asteroid Pack 1.00 which adds Ceres, Vesta, and a few other asteroids to your Orbiter solar system. Because operating with a continuous low-thrust engine is rather different from the usual "burn and coast" method most often used in Orbiter (and in real life), Brian has added some special attitude hold features that are more stable under high time acceleration. He also added a Mars flyby scenario. The real Dawn's Mars flyby is coming up in just a few weeks(February 17). The January 27 entry in the Dawn Journal includes a great explanation of the encounter
Posted by FlyingSinger at 8:53 AM